A rather quite start to the 14th didn't leave us feeling highly optimistic although a Locustella seen briefly in Holland did give us the feeling that something might happen. The day progressed in an otherwise quiet fashion, the first Greenfinches of the year were at Holland and Sangar while 3 Velvet Scoters also made their way onto the year list. Remaining Chiffchaffs, Blackcaps and Robins were joined by the occasional Goldcrest, Redwing and Song Thrush but otherwise it felt like the day would fizzle out. However a Pallas' Warbler decided to make its presence felt at about 17:30 in the obs crop and was closely followed by the second Lanceolated Warbler of the year in Holland. A rather bizarre late flurry that left almost everyone a bit baffled to be honest!

The 15th didn't include quite as much bafflement although there was a bit! A Grasshopper Warbler or what is assumed to be one appeared in the gardens first thing but wasn't seen again. A Common Rosefinch was also in Holland but found its way into a net. Other highlights include 2 Black-throated Diver, a Greenshank, a Lesser Whitethroat and a Tree Pipit. It's slim pickings but things are looking good over the next few days so we'll keep plugging away! 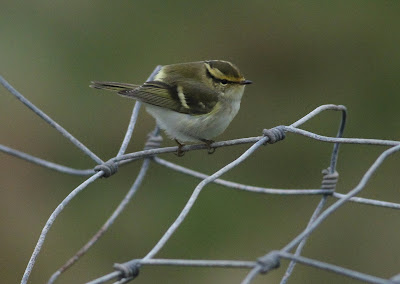