A couple of days where thick fog was the dominant feature, grounding planes to cause traffic chaos; there were breaks in the fog though – a few hours in the afternoon of the 10th when it actually felt pretty warm and sunny for a while and then the afternoon of the 11th when it was overcast but calm (it was still foggy in Kirkwall though so no flights got in!).   We finally got in on the Crossbill irruption on the 10th, albeit briefly with a female TWO-BARRED CROSSBILL seen and heard near the Old Kirk from where it flew over to the coast but couldn’t be relocated.   Other birds included a Heron, the Quail singing from long grass near Holland, an increased 270 Golden Plover, one Little Tern still in Nouster and 2 Common Crossbills trapped and ringed in the evening of the 10th. 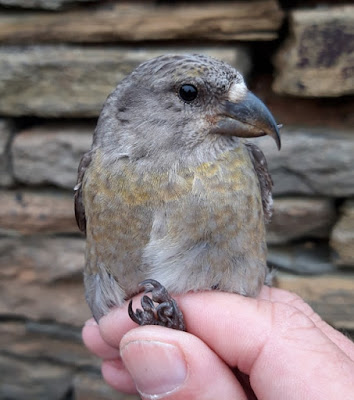