Spitting, drizzly rain through much of the day, only clearing up by mid-afternoon with the moderate SSE wind dropping off as well; we hoped at least a few birds would pop up after the rain stopped but in keeping with the autumn so far, this was not to be, it was more a case of old birds reappearing with the Shorelark again at Westness (last seen on the 17th), the Grey-headed Wagtail near Hooking (last seen on the 13th) and a Song Thrush re-trapped in Holland (originally ringed but not seen since, on the 1st).   Other bits included 3 Sooty Shearwaters, 5 Manx Shearwaters and 5 Storm Petrels off the Lighthouse in the afternoon, a Greenshank, still little flocks of juvenile Knot scattered around in funny places, 11 Ruff and last night’s ringed Little Stint at Westness. 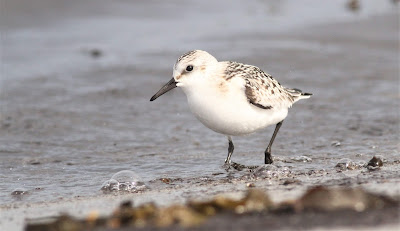 Sanderlings, as well as Knot seem to have had a good breeding season with many spangly juveniles in the flocks