There was a good influx of migrant birds which kept us busy. The highlight was two Greenland White-fronted Geese at Hooking.
Starting with larger birds, two Grey Herons were around, while a Red-throated Diver and 11 Red-breasted Mergansers were the best seen on the sea. Nouster bay still held 3 Lesser Black-backed Gulls and a Sandwich Tern. Birds of prey seen were two roaming Hen Harriers and a Merlin out south.
Some songbirds maintained similar as recent totals in the case of 64 Skylarks, 102 Meadow Pipits and 21 Pied Wagtails. There were notable new arrivals however with 23 Wheatears and 36 Redwing most conspicous in the field. Two Song Thrushes, a Chiffchaff, 3 Goldcrests, 2 Siskins, the 18 Twite, a flyover Redpoll (most likely Lesser) and a Carrion Crow made up the rest. 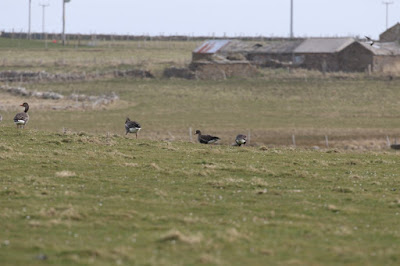 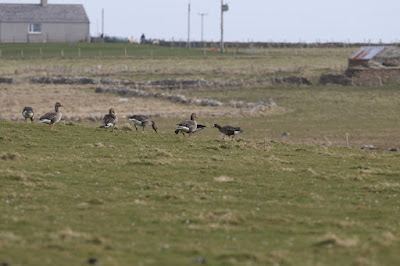