Another nice, calm day with a light easterly breeze but the low cloud and fog was always lingering, occasionally drifting in and out; a few scarcities were unearthed through the day with an Icterine Warbler trapped at the Obs first thing, a fine, fully red male Common Rosefinch at Bewan House (which remained particularly elusive) and a Wood Warbler in Ancum Willows while the Eastern Subalpine Warbler was still around the Obs – when it was re-trapped it had put on 1.3g from when it was originally in the bar, not bad for a bird that only weighs 10g to start with! 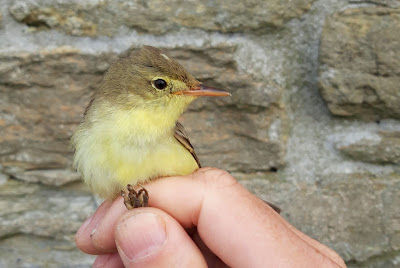