The wind had dropped right off by early morning on the 18th leaving a lovely, sunny, warm day allowing us to get out and about trying various ringing projects; we targeted some Sand Martins at our newly started colony which proved to be very successful as we caught 15 birds, including a good number of fledglings (it is especially good considering that before this year only a single Sand Martin had ever been ringed on the island!).   The rest of the morning was dominated by Black Guillemots, both mist-netting some adults and searching for the chicks – its proving to be another good breeding year for this species. 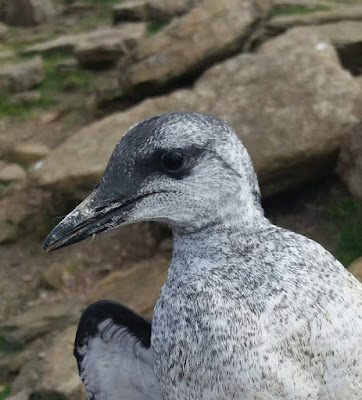 Many of the Black Guillemot chicks are near fledging


We did get out and do some birding as well with the White-winged Black Tern being seen briefly again at Bewan with 5,000+ Arctic Terns while a Spotted Redshank at Brides was new for the year and the highlight of today’s wader counts which included 51 Knot, a Purple Sandpiper, 140 Dunlin, 2 Black-tailed Godwits and a Whimbrel.   Other birds of note consisted of a Manx Shearwater off The Lurn, 2 Herons, 4 Collared Doves and 60+ Pied Wagtails again in the roost at Ancum.


The calm 18th proved to be just a brief respite from the wind as by the morning of the 19th a very strong and increasing easterly wind was blasting across the island making time in the field very hard work; as is the theme for most of the blog posts, waders formed most of the interesting sightings with single Greenshank (the first of the autumn) and Grey Plover new in, along with counts of 754 Golden Plover, 238 Oystercatchers (reduced numbers than of late), 56 Knot, 55 Sanderling (slight increase than of late), 251 Dunlin, 10 Bar-tailed Godwit, 5 Whimbrel and 81 Redshank while just 2 Red-necked Phalaropes were still on Gretchen.


The limited other sightings through the day included a single Common Tern with a reduced 2,650 Arctic Terns (although numbers do fluctuate at the top end depending on how many are feeding offshore), a Heron, 8 Teal and 7 Shoveler. 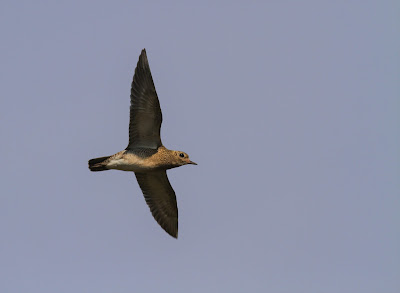 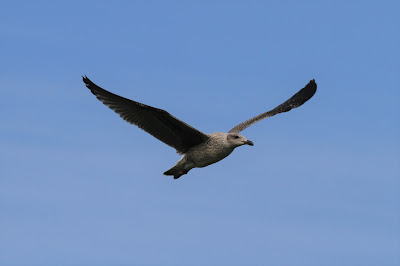