Nice and sunny on the 28th with a brisk SE breeze; waders were again the main interest with a new Little Stint on Gretchen the highlight along with 66 Knot (including a Norwegian colour ringed individual at Bewan), 60 Dunlin, 9 Black-tailed Godwits, a Green Sandpiper, 124 Turnstone and a single lingering Red-necked Phalarope, still on Gretchen.


Other little bits included a single Garganey still, 4 Collared Doves still and a Swift which was seen going to roost in the wall near the Gretchen hide and promptly was caught and ringed – only the 8th to be ringed on the island. 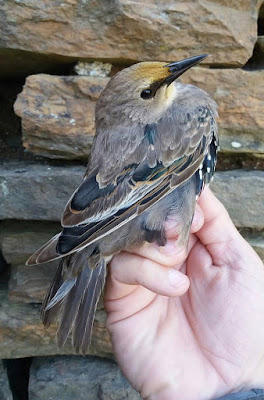 Young Starlings are looking interesting at the moment, moulting into adult plumage and covered in pollen!

Another lovely, sunny day on the 29th but with much lighter winds creating a very pleasant day out in the field; the nets at Holland first thing produced the first juvenile Willow Warbler of the autumn – the first signs of returning passerine migrants along with locally dispersing juvenile Reed Bunting and three Swallows (two of which were ringed as chicks nearby).


Waders through the day included 465 Golden Plover, 128 Lapwing, 128 Sanderling, 7 Bar-tailed Godwits, a Green Sandpiper, a Wood Sandpiper at Brides, 176 Turnstone and again, a single Red-necked Phalarope on Gretchen – which, upon giving incredibly close views today was seen to be carrying an orange geolocator on its right tibia!   Despite bobbing around within feet of observers it was impossible to get any details on the ring but I suppose it is not supposed to be looked at in the field.


Also seen through day were at least 7 Herons (including 4 which flew south offshore), the Black-throated Diver again, 24 Teal and a single Swift. 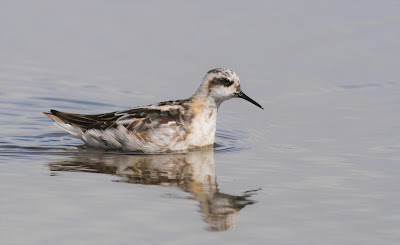 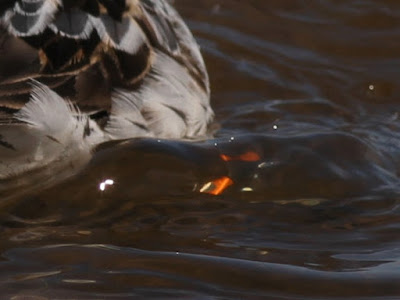 This is the best view of the Red-necked Phalaropes geolocator but we still haven't traced where it originates, Shetland is the best guess 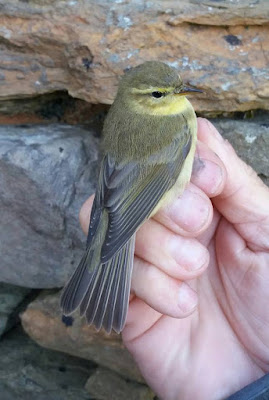 The first juvenile Willow Warbler of the autumn 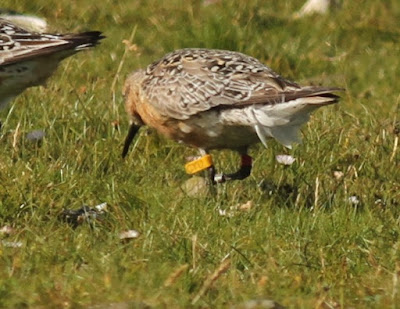 This colour ringed Knot was ringed in Porsanger, at the top of Norway in 2007 and has been re-sighted there every year since, as well as a few winter/passage sightings in The Netherlands.   This is the first time this bird has been seen over this side of the North Sea - a great series of re-sightings building a detailed picture of movements

I have had many of those Red Knots in the Thames all apart of Jim Wilsons scheme, if you got the full history of this individual I'd be interested to know if it had been seen off of Canvey / Leigh in the Thames. Long time since we were ringing Great Knots together at Broome! Hope your well and enjoying North Ron- seems like your off to a great start. Hope to be up there later in the year if the Northern Harrier returns.

Yep, had the full life history of that particular bird but this is the first time its been seen this side of the North Sea but with plenty of re-sightings in Norway and a couple in The Netherlands.