A bright and breezy start with a spell of drizzly, damp, murk late morning becoming dry again with the wind slightly dropping in the afternoon; it was a good day in the field with year ticks cropping up all over the place comprising a Jack Snipe at Hooking (unusually scarce this winter), 2 Goldfinch at the Obs – only the third March record, a Bonxie off the north end beating up Great Black-backs and finally a Goldcrest caught at Holland in the evening.

The days highlight though was an adult White-tailed Eagle seen briefly during the drizzly weather late morning (possibly the same bird that was later seen on Westray).   Other totals included 9 Great-northern Divers, 2 Barnacle Geese, 9 Gadwall, the drake Green-winged Teal still, 15 Long-tailed Ducks, a Merlin, a young female Peregrine which killed a Tystie on the west coast, a Black-tailed Godwit, 3 Lesser Black-backed Gulls, 2 Woodpigeons, 25+ Pied Wagtails, a Wheatear on The Links, a Song Thrush, 2 Chaffinches, a further increase to 26 Linnets, 6 Twite and 4 Snow Buntings. 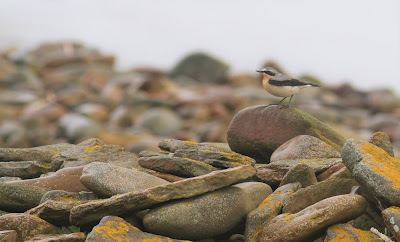