A decent day with the wind still bang in the east but much lighter than yesterday and plenty of bright sunshine encouraging folks to spend some long hours in the field; yet again the main feature and talking point of the day was the mesmerising array of very pale Common Redpolls across the island with at least 53 scattered around in small flocks, in amongst which was at least one bird that was scrutinised in depth and was probably a Coue’s Arctic Redpoll but not everyone was convinced so it will unfortunately have to be left – just give up and walk away!
The other two highlights consisted of a lovely female Northern Bullfinch trapped at Holland in the evening where, shortly afterwards a Long-eared Owl was also caught and was found to be bearing a Norwegian ring.   Across the island other migrants comprised 2 Hen Harriers, 3 Merlin (with two seen hunting cooperatively around Ancum), 2 Kestrels, a Peregrine, 11 Woodcock, 29 Skylark, 33 Meadow Pipits, 16 Rock Pipits, 5 Robins, the Whinchat still, a Wheatear, 68 Blackbirds, an increase to 73 Fieldfare, 11 Song Thrush, 92 Redwing, a Chiffchaff, 6 Goldcrests, 2 Jackdaws, 11 Chaffinches, 9 Brambling, 21 Twite and 5 Snow Buntings. 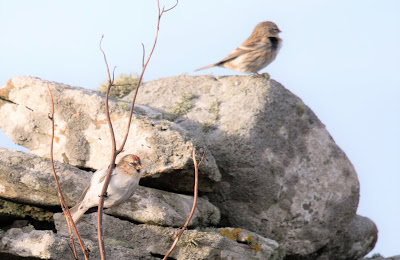 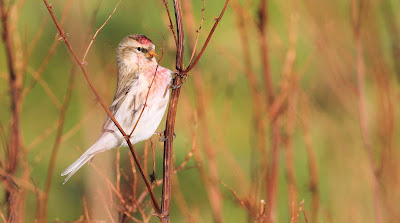 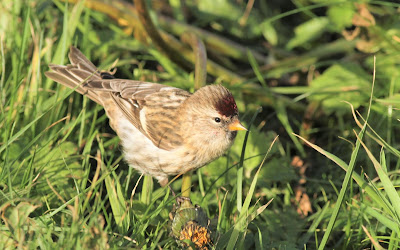 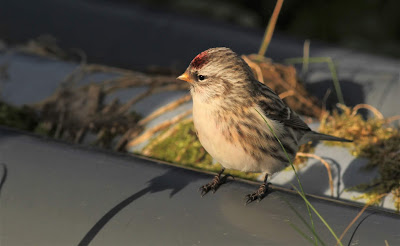 Redpolls, there may or may not be an Arctic in there somewhere