There's been a definite 'chill' in the air as a strong north-westerly wind and frequent hail or sleet showers can make for unpleasant conditions. A couple of late Chiffchaffs on 5th included a ringed 'tristis' type at Brigg and there was an equally late (or perhaps even wintering) Black Redstart at Hooking on 6th. A check of the waders on the links the same day saw 45 Ringed Plovers and 76 Dunlin counted and 25 Shovelers were on the loch at Hooking. The drake Green-winged Teal has been present throughout and the hybrid American x Eurasian Wigeon reappeared on the latter two dates. Some other good counts of ducks were made on the 7th amounting to 407 Wigeons, 10 Gadwalls, 177 Teal, 20 Pintails, 33 Tufted Ducks, 20 Long-tailed Ducks, 8 Goldeneyes and 338 Eiders. There were still 12 Tundra Bean Geese (including the juvenile which hadn't been seen since 30th Nov) plus the Greenland White-fronted Goose, 59 Pink-footed Geese, 7 Barnacle Geese and the Pale-bellied Brent Goose. Other odds and sods of note included 9 Red-throated Divers on the sea, 148 Purple Sandpipers and 14 Snow Buntings. 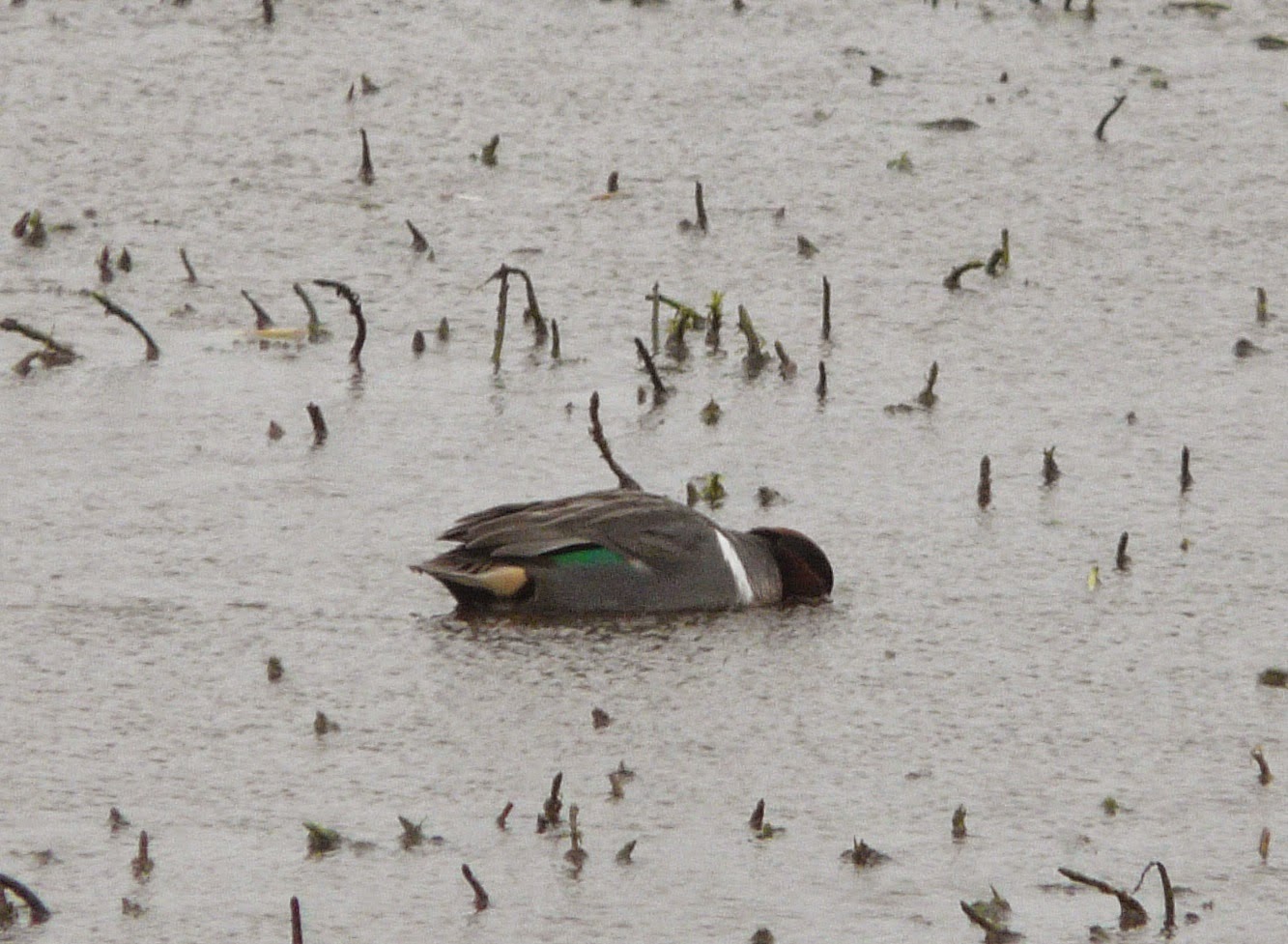 Green-winged Teal
﻿
Posted by northronbirdobs at 16:55 No comments:

Paperwork, maintenance and all those jobs we ignored in the autumn tend to take priority at this time of the year but we do always try and get some fresh air each day-even if its just a walk with the dogs. Decent weather during the period has allowed most sections of the island to be visited at least once and its the current influx of Tundra Bean Geese which have been the most noteworthy. Between 7 and 10 have been seen daily, but we know there are at least 15 actually present while the juvenile Greenland White-fronted Goose remains, as does the Pale-bellied Brent Goose, 7 Barnacle Geese but some new Pink-footed Geese have arrived as their number reached 62 on 4th. Other wildfowl include 4 Whooper Swans, a Shelduck (3rd-4th) and peak counts of 215 Wigeon, 15 Pintails, 25 Tufted Ducks, 184 Eiders (all 3rd), 22 Shovelers (2nd), 163 Teal and 86 Mallard (4th) and the drake Green-winged Teal has been present throughout. The Grey Plover is still here, a late Short-eared Owl was at Ancum (2nd) and there have been up to 3 Hen Harriers, 2 Merlins and a Pergrine present. Passerine numbers are thinning rapidly but the Dunnock, Blackcap and at least 3 Chiffchaffs remain and peak Thrush counts came to 62 Blackbirds, 23 Fieldfares, 67 Redwings and 8 Song Thrushes. Perhaps as many as 40 Robins are lingering on the isle but the highest daily count has been 17 on 2nd and Twite and Snow Bunting numbers both peaked at 48 on the 3rd. 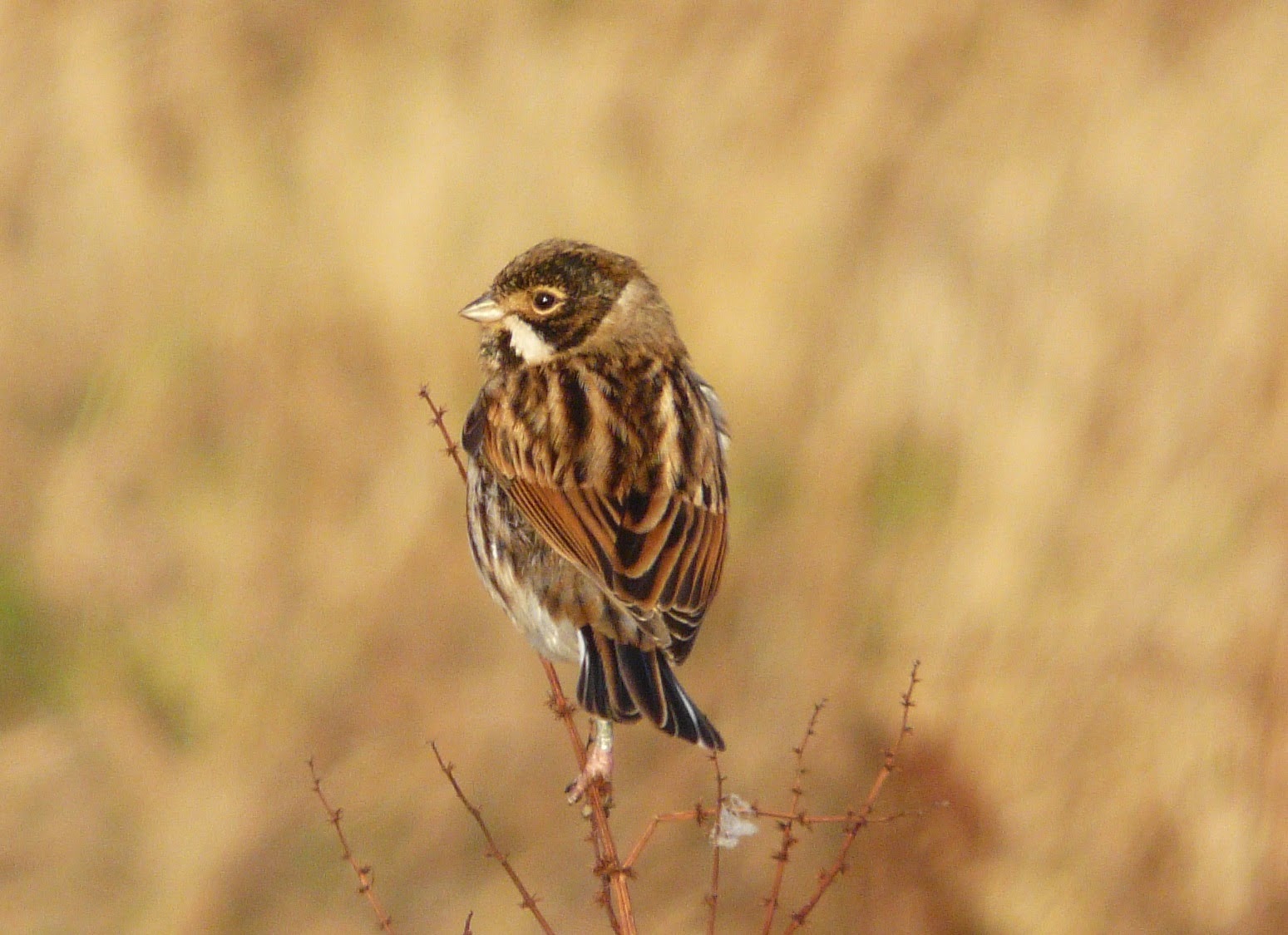 Reed Bunting
﻿
Posted by northronbirdobs at 22:00 No comments:

There was nothing significant to report from a wet 28th and other than a Jack Snipe and Chiffchaff the 29th was a quiet day too. A mild and calm 30th drew most attention but a chance to work through the Geese revealed little change with the juvenile Greenland White-fronted Goose still present as were 9 Tundra Bean Geese (including the unassigned juvenile from 27th which we now believe to be of this race), 48 Pink-footed Geese and the 7 Barnacle Geese still. The drake Green-winged Teal remains on Gretchen, but 6 Woodcocks included a few new birds and the 20th individual of 2014 was caught and ringed with a new Water Rail also caught somehow in the falling apart Heligoland 1! The calm conditions also allowed the nets at Holland to be opened and with nearly 40 birds processed (29 new) it was a surprisingly productive session. Thrushes made up the majority of the days passerine total with 72 Blackbirds (23 new birds trapped/ringed), 39 Fieldfares, 28 Redwings and 4 Song Thrushes logged. A new Dunnock and Blackcap were also ringed, with a second of the latter at the Post office with 9 Robins, 14 Rock Pipits, 13 Twite and 35 Snow Buntings also recorded-not a bad day considering its December tomorrow..
Posted by northronbirdobs at 12:20 No comments: