A very mixed bag in terms of birds over the past few days but a lot of it of fairly decent quality. A spell of winds that seemed to have a whiff of Easterly that produced some scarce migrants.

The 25th was a mostly quiet affair however the appearance of a Red-breasted Flycatcher in Scarfie Geo in the afternoon provided some excitement, followed by a bit of panic. With some of the photos looking pale it needed re-checking but further photos revealed it to be dodgy light making it look pale. The 26th was equally quiet, the Green-winged Teal remained on Gretchen and the Little Bunting from the 24th was re-found in the obs oat crop. The following day was much quieter in poor weather but news on the neighbouring Papa Westray in the evening would mean most of the staff would be away for the subsequent two days. The 28th however did have its highlights before our flight West. The Hornemann's Arctic Redpoll made a brief re-appearance around the obs croft but was difficult to pin down, however in searching for it the team uncovered a Grey Phalarope on Gretchen, 9 Greenfinch and several Common Redpoll and Siskin. The trip for the Varied Thrush on Papay was largely successful and highly enjoyable if made longer by being delayed for fog on the 29th! The 30th saw us return and pick up where we left off, a big dump of thrushes in the afternoon saw over 800 spread across the island with a few Fieldfare and Song Thrush thrown in for good measure. A second Richard's Pipit of the Autumn was found around Senness in the rain as was a Lark sp. at Dennishill that had all the makings of a Short-toed Lark but seemed to vanish in near unbirdable rain and will have remain as unidentified. 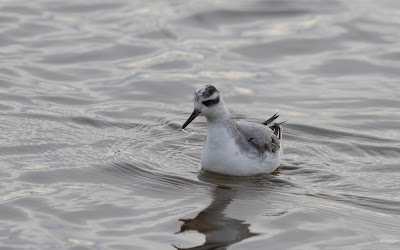 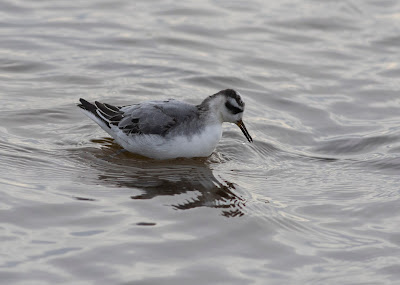 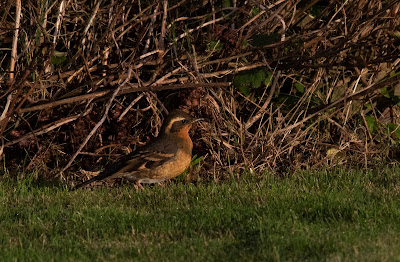 The Papa Westray Varied Thrush, would've been rude not to include a photo of it really!

Posted by northronbirdobs at 20:24 3 comments:

Whilst unfortunately there has been no repeat of the easterlies from earlier in the week, reasonable numbers of late autumn migrants have remained on the island during the subsequent days, along with a trickle of new arrivals including some quality scarcities.
The 20th was a rather quiet day, with a Sparrowhawk being the only notable highlight among the remaining thrushes and Goldcrests. The following day was a similar story, although a Shelduck at Ancum along with several hundred Redwing around the east side of the island was enough to keep us going.
The Green-winged Teal was seen again on Gretchen Loch on the 22nd, although it wasn't until the evening that the standout highlight of the day was found, with a smart Hornemann's Arctic Redpoll trapped at Holland. This perhaps wasn't a complete surprise given the recent run of northerlies, although a fine addition to the year list nevertheless. A morning seawatch on the 23rd was rather challenging in the freshening southerly wind, with birds passing quickly at distance. Counts included 24 Sooty Shearwaters, 2 Little Auks and 2 Arctic Skuas. On the land, a Mealy Redpoll and a trickle of Redwings and Robins were the only sightings of note. 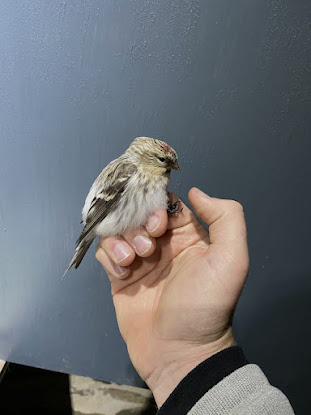 Hornemann's Arctic Redpoll (George Gay)
An overdue addition to the year list was discovered on the 24th, with a Little Bunting being found in the observatory oat crop. No doubt the almost complete lack of easterlies this autumn have played a large part in the poor turnout for this species in 2021, along with many other expected eastern migrants (e.g. Yellow-browed Warbler). The bunting theme was to continue shortly afterwards as another year tick was discovered in the form of a Yellowhammer, found in the Rosa rugosa bushes in T4 next to the oat crop. Best of the rest included 2 "North-western" Redpolls at Holland and 11 Long-tailed Ducks in Linklet Bay. Whilst it's late on in the season now, we're optimistic for the upcoming week and the general feeling is we might be able to squeeze in some last minute finds if we're lucky! 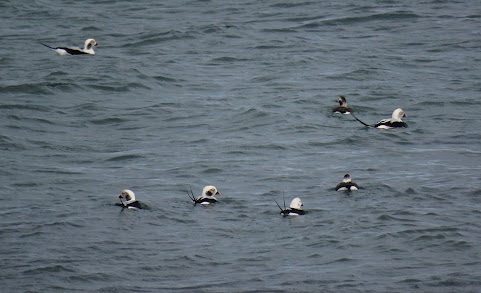 We've finally had some easterlies to get our teeth into and although they haven't quite produced that big highlight bird that was going to round off our Autumn. However that said it's been brilliant seeing large numbers of common migrants around the island.

Saturday was a rather quiet day although a morning sea-watch produced good numbers of Sooty Shearwater but the highlight for the day was a Grey Phalarope that passed in the afternoon.

The following day looked more promising and with the winds switching into the east there more migrants about on the land. Good numbers of Blackbirds and Redwing had made landfall overnight but they didn't really have much of a supporting cast! A Goldcrest at Stromness and a Tree Pipit at Ancum were about all the land had to offer. The sea was again the provider of big highlights for the day another Fea's-type Petrel was the standout bird, a good showing of other sea-birds included a juv Long-tailed Skua, 18 Pomarine Skua, 4 Arctic Skua, 11 Little Auk and 2173 Kittiwake.

The 18th was in simpler terms, absolutely hooching with migrants, a large overnight arrivals of Autumnal migrants included 3000+ Redwing, 700+ Blackbird, 40+ Song Thrush, 10+ Ring Ouzel, 30+ Goldcrest, 58 Robin, 6 Woodcock, 2 Long-eared Owls 200+ Brambling, 3 Chaffinch, a Lesser Whitethroat, a Willow Warbler and a Chiffchaff. Perhaps the biggest surprise of the day was the discovery of perished Cory's Shearwater under the lighthouse!

The 19th was a day of trying to mop up anything that remained and eek out that star bird, however it was much the same story as the previous day although highlights included 4 Long-eared Owls in Ancum Willows, the return of the Green-winged Teal on Gretchen and 9 Woodcock. 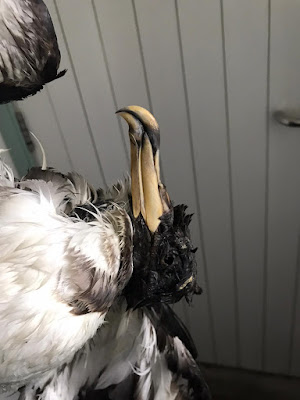 Posted by northronbirdobs at 11:47 3 comments:

Highlights from the 12th to the 15th of October have included 7 Whooper Swan, a Barnacle Goose, a Velvet Scoter, a Common Scoter, a Little Egret (fourth island record), 10 Manx Shearwater, 356 Sooty Shearwater, 2 Arctic Tern, a new juvenile Lesser Yellowlegs (our second of the autumn and the third island record), a Siberian Chiffchaff, a Chiffchaff, 8 Greenfinch and a Common Redpoll. 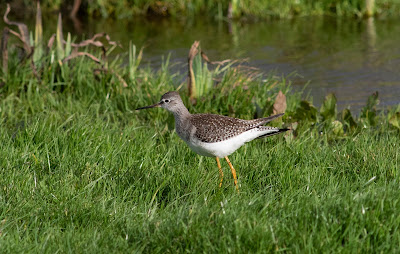 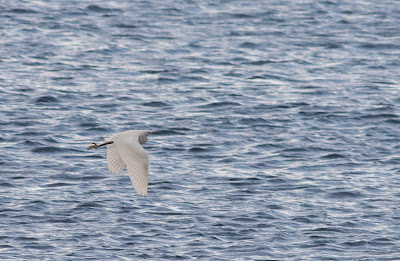 Lesser Yellowlegs and Little Egret
Posted by northronbirdobs at 11:32 2 comments:

The quiet birding continues to be a dominating factor in almost everything we talk about at the moment, the weather has been firmly set in a Westerly direction for what feels like weeks. The 11th was probably the pick of the bunch weather wise with two days before being windy and at times quite wet!

The 9th saw the Richard's Pipit make a brief re-appearance in Kirkie Park West before seemingly evaporating into nothing. A Red-breasted Flycatcher was discovered around Senness in the morning and a Yellow-browed Warbler was still around Veracott while 2 Tree Pipits in the Gravity area and Sibe Chiffchaff made up the best of the rest for the day.

The 10th was a pretty awful day with howling winds and showers, the only highlight being a Hawfinch seen briefly in Holland. The 11th however saw things clear up a bit and a nicer spell of weather was more conducive to birding. A Pectoral Sandpiper was flushed off of Cauldhaim before re-locating to Sandsheen. The Sibe Chiffchaff was seen at Westness and good numbers of Snow Buntings were seen around the island. 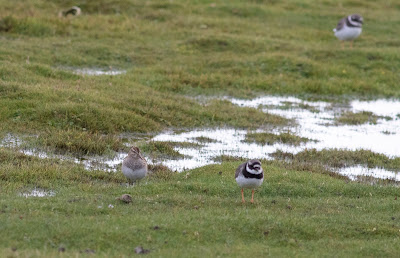 Posted by northronbirdobs at 09:50 2 comments: 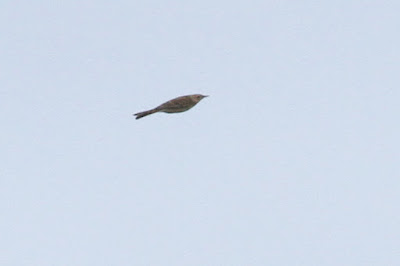 A fairly settled few days of weather still hasn't produced any numbers of migrants and although there have been a couple of highlight birds the general feeling is of slogging around for little reward, perhaps that goes with the time of year though.

The big highlight of the last few days has been a Lanceolated Warbler trapped and ringed at Senness, it represents the 8th record for the island and our second in as many years following last years showy bird around Trolla. Elsewhere warbler numbers have been in short supply with low counts of Willow Warbler and Blackcap. A Reed Warbler was trapped in Holland on the 4th, while between two and three Yellow-browed Warblers have been hanging around in various thistle patches and the 5th saw Barred Warblers at Trolla and Stennabreck. Elsewhere a Common Scoter has been seen feeding in the bay at Nouster, the first Long-tailed Ducks of the Autumn were back in Linklet, a sure sign that winter can't be too far away!

Pink-footed Geese continue to move South in small but steady numbers with double figures posted most days. A small influx of Blackbirds, including some all dark Scandinavian birds were present on the 5th but lower numbers of other Thrushes doesn't seem to bode well for a big Thrush movement. We've had a couple of frustrating getaways too, a Common Sandpiper like wader has been seen twice now but very poorly and never re-located despite good efforts and a Pipit at Westness gave everybody the slip in pouring rain on the 3rd.

It seems like we'll struggle for any big numbers of birds this Autumn but there's little we can do but get out, keep birding and pray for Easterlies!! 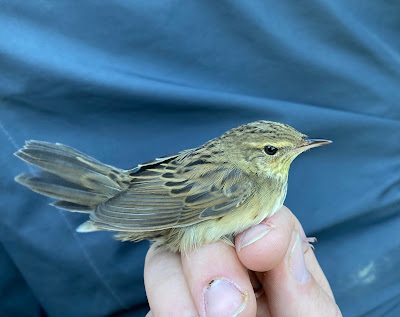 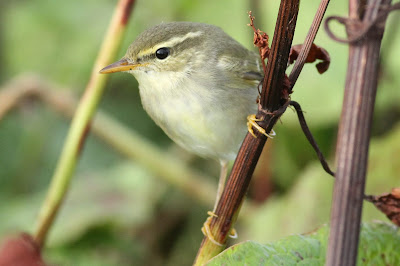 the Arctic Warbler is still here for its fourth day
Posted by northronbirdobs at 09:28 1 comment: