A decent variety of species arrived on a pleasant morning, and the best find of the day was also one of the first: a Yellowhammer feeding in the potato field at Twingness. A couple of Chiffchaffs, 3 Goldcrests, 2 Grey Wagtails and a Greenfinch were all new species for the year, and 25 Fieldfares were the first for some weeks. A total of 20 Lapland Buntings were counted, including a flock of 15 at the airfield; 7 Wheatears were dotted around the island; and other small migrants included 15 Chaffinches, 3 Siskins, 2 Robins, 8 Dunnocks, 6 Redwings and 85 Meadow Pipits. A flock of 200 Purple Sandpipers was at Bridesness and the itinerant Rook continued to roam around the island. 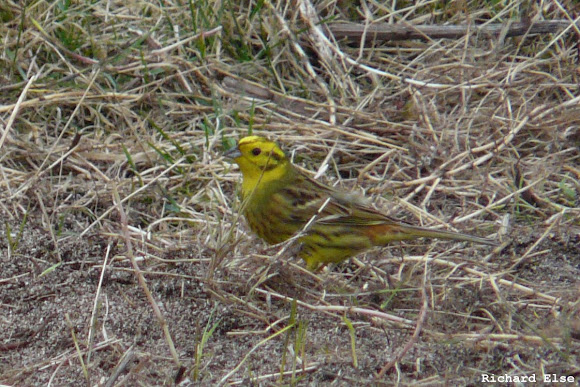 It was predicted last week that a Pine Bunting would surely soon appear in the newly rotivated potato field. The prediction turned out to be pretty close, but, unfortunately, traces of yellow in the bird's plumage meant that we could only really call it a Yellowhammer. 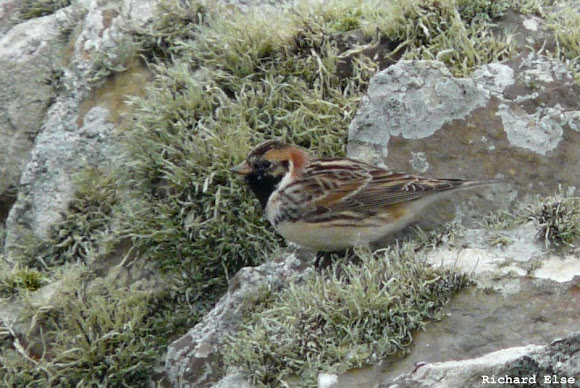 After last autumn's record numbers of Lapland Buntings, the current influx of birds returning north was not unexpected. 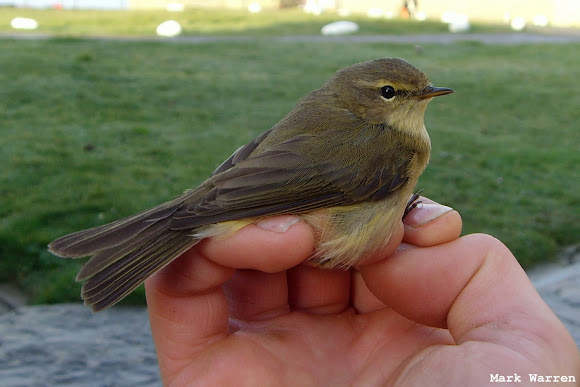 The first Chiffchaff of the year conveniently made its appearance in the Heligoland trap.
Posted by northronbirdobs at 20:43 No comments:

A few new migrants were dotted around the island in the morning, the most noteworthy of which were 15 Lapland Buntings on the west coast and airfield. Another one, probably a long-stayer, was with the Skylarks at Kirbest; 3 Wheatears, 3 Chaffinches, 2 Song Thrushes, 43 Meadow Pipits and 9 Pied Wagtails were seen; and a small arrival in the afternoon delivered 2 Robins. A couple of Redwings were fresh-in, and a count of 30 Blackbirds included a few new birds as well as the wintering population. A Little Gull at Bridesness Point was the pick of the non-passerines, while others included 3 Merlins, a Peregrine and a count of 242 Golden Plovers.
Posted by northronbirdobs at 19:55 No comments:

There was no sign of the previous day's White-billed Diver, but a rarer bird (in a North Ronaldsay context) was discovered in the form of a female Great Tit at Holland. There was not a lot else to report: 14 Great Northern Divers, 11 Red-throated Divers and a Great Skua were counted offshore, three Chaffinches were back at Holland, a couple of new Redwings had arrived and a Lapland Bunting was still with the Skylark flocks. The Rook was still touring the island and 39 Meadow Pipits were seen. 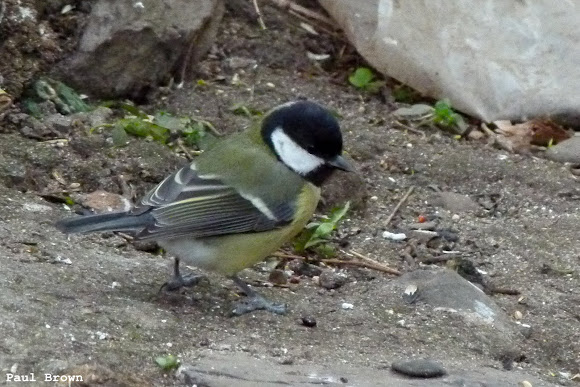 The Great Tit spent the day feeding amongst the local sparrows. It was trapped for ringing in the afternoon and confirmed as a first-winter female.

A White-billed Diver, the first real rarity of the year, was found on the sea off Tor Ness during the morning. It was considered to be a young bird, but it soon drifted further out to sea.
This species has been about annual at North Ronaldsay in recent years, with most records occuring in April.
Nine Great Northern Divers and 8 Red-throated Divers were also seen off the west coast, while a Great Skua and a Sandwich Tern also passed by. A Jackdaw was another new species for the year, a flock of 15 Ravens flew south over the island and a couple of Common Redpolls and a Siskin also arrived. Meadow Pipits further increased to 29, and Pied Wagtails to 19; and the Peregrine and Rook remained. 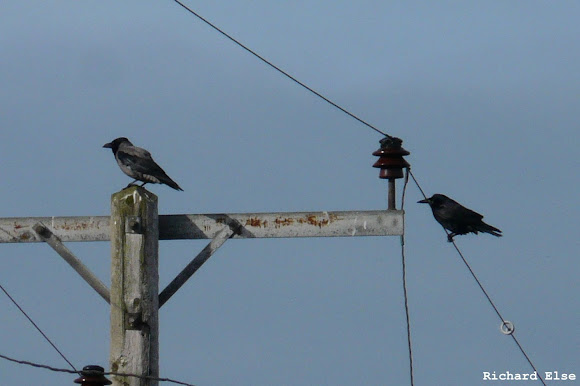 Unfortunately, the White-billed Diver didn't linger long enough for photos to be taken, but a picture of a Rook is almost as interesting. No?
Posted by northronbirdobs at 23:28 No comments:

The first Jack Snipe of the year made its belated appearance in the afternoon, and a male Lapland Bunting in smart breeding plumage brightened up an otherwise uneventful day. The Rook was still present and a Common Redpoll, 20 Meadow Pipits and 9 Pied Wagtails were logged. 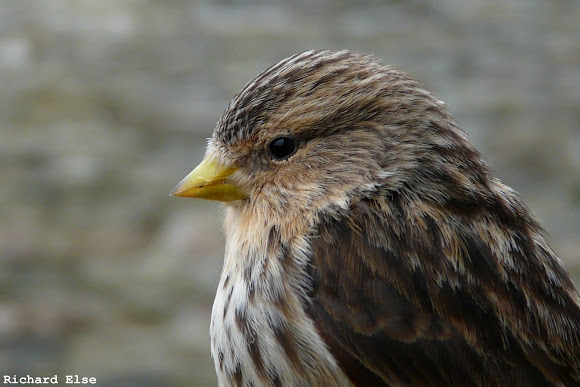 A newly rotivated field near the observatory is already proving popular with the Twites; calm weather has allowed several of them to be caught and ringed.
Posted by northronbirdobs at 23:24 No comments:

An early morning Sandwich Tern - the first of the year - was the best sighting of a calm and drizzly day. Three Rooks were new migrants, and numbers of Meadow Pipits and Pied Wagtails continued to creep up with 51 and 14 respectively. A Dunnock was at Holland, while passerines remaining from previous days included the Wheatear, a Song Thrush and a Chaffinch. 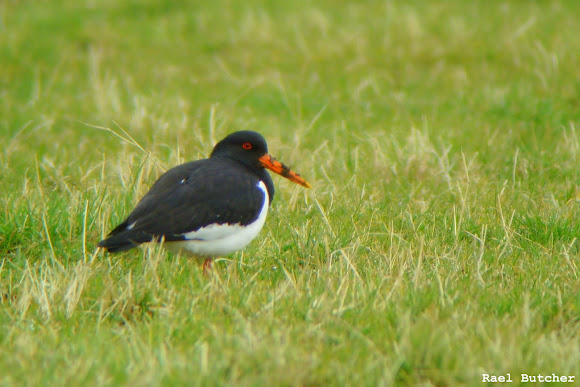 Oystercatchers have been a very conspicuous feature of birding around the island of late, particularly at high tide when they gather inland to feed in the fields. 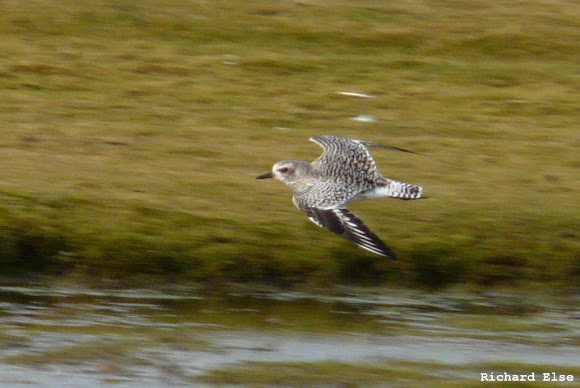 The long-staying Grey Plover on the links was seen again today. If only someone had checked that part of the island yesterday, we would have equalled the highest ever count.

Posted by northronbirdobs at 19:42 No comments:

A reasonably calm day saw Wheatear make its anticipated debut on the island's year-list, just two days later than the earliest ever arrival here. Other migrant passerines included 23 Meadow Pipits, 11 Pied Wagtails, 127 Skylarks and 2 Song Thrushes. The most unusual sighting of the day was a flock of 10 Grey Plovers flying along the west coast: this is a fairly uncommon species here, and todays count is only one fewer than the all-time record. The 20 Whooper Swans remained and the Peregrine was seen again near the lighthouse.
Posted by northronbirdobs at 21:16 No comments:

The day's highlight was an immature Iceland Gull that drifted along the west coast in the afternoon. A Peregrine was another new migrant, 20 Whooper Swans were scattered around the island and 11 Red-throated Divers were seen offshore. There was plenty of Skylark activity; the count of 217 was probably a very conservative estimate. Two Chaffinches and the Siskin remained at Holland. 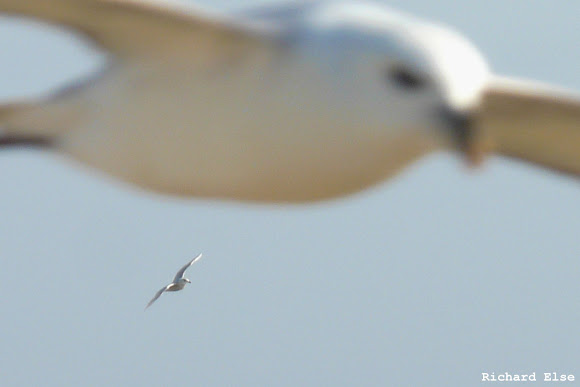 The problem with having so many Fulmars is that they sometimes obstruct your view of Iceland Gulls.

There were few migrants of note on the 19th: Skylarks increased in number to 120, an extra Chaffinch joined the 3 already present, 5 Meadow Pipits were counted and 4 Pied Wagtails were also seen. The following day was even quieter, with 3 Lesser Black-backed Gulls the only new arrivals noted. A strong westerly wind on the 21st did nothing to bring any more landbirds to the island, but good counts of 15 Great Northern Divers and 8 Red-throated Divers were found sheltering in the leeward bays.
The 22nd produced a slightly more varied morning's birding. A movement of Whooper Swans involved 11 new birds joining the 6 wintering birds at the north of the island. A Great Skua was new to the year-list, 2 Rooks were at Westness, 5 Grey Herons drifted overhead, 9 Red-throated Divers were offshore and a Woodcock was near Ancum. Skylarks were evidently on the move: a count of 221 was the highest of the year so far. Twite numbers reached 145, while other passerines included 4 Song Thrushes, 6 Meadow Pipits, 4 Pied Wagtails and a lingering Dunnock. At least 3 Hen Harriers were present, including an adult male. 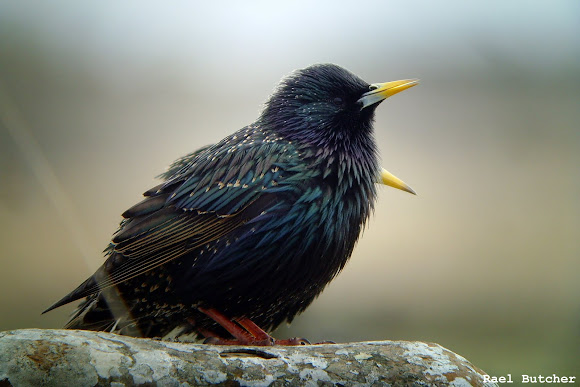 Mass hatch-outs of insects on the beaches have attracted large flocks of feeding Starlings.

Today's arrival was the first movement of Whooper Swans this year.

Posted by northronbirdobs at 21:43 No comments:

The 15th was very uneventful and provided little worth reporting: three Pink-footed Geese and three White-fronted Geese were still mingling with the Greylags and another Pied Wagtail was the only new passerine. The first Dunnock of the year at Twingness was the highlight of the 16th, with two Song Thrushes also arriving near the Observatory.
A distinct improvement was noted on the 17th, when the simultaneous arrival of a variety of new birds signalled that spring migration was finally getting under way. A Mistle Thrush, a Chaffinch and a Sparrowhawk were all new species for the year, as were at least 2 Whimbrels that turned up in the afternoon. Passerine migrants included a new Dunnock, a Robin, 3 Song Thrushes and 4 Pied Wagtails; and a few Skylarks made there way north during the morning. Two Woodcocks, the first for about a month, were found; an influx of Black-headed Gulls to the colonies reached 141 birds; the Golden Plover flock increased to 125; and 28 Snipe were seen - the highest count of a very poor couple of months for this species.
New birds for the year on the 18th were a female Siskin and a Kestrel. A scattering of thrushes included 2 Fieldfares, 2 Song Thrushes and about 10 newly arrived Blackbirds; two Robins near the lighthouse and three Chaffinches at Holland were also new; 6 Pied Wagtails were seen and the Dunnock was still at Twingness. 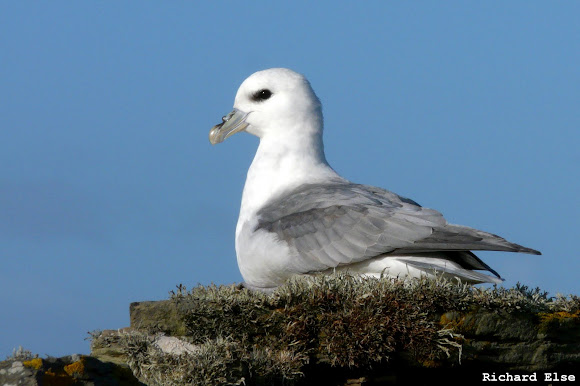 In the absence of any other decent shots this week, a Fulmar will have to do. A ubiquitous species on the island, large numbers of these birds can currently be seen all around the coastline.
Posted by northronbirdobs at 20:06 No comments:

In a week that saw everything from perfectly still, sunny days to snow blizzards and horizontal hailstorms, the diversity of birds unfortunately failed to match that of the weather conditions. The anticipated first Pied Wagtail of the year arrived on the 8th, soon followed by further single sightings on the 10th, 11th and 12th. A Goldfinch on the 9th and a Woodpigeon on the 10th were also new species for the year. The three lingering European White-fronted Geese were joined by two more on the 9th, while the numbers of Greylags began to drop. Some Skylark passage was in evidence during the calm spells, peaking at 153 birds on the 12th; and a Lapland Bunting was feeding with the lark flock at Kirbest on the 10th. 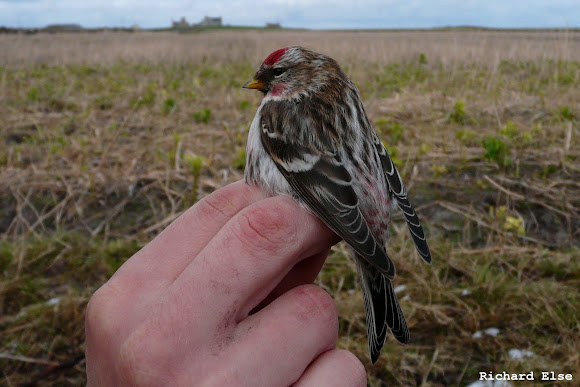 The finch flock increased further this week, containing up to 112 Twites, 15 Linnets and this adult male Common Redpoll. 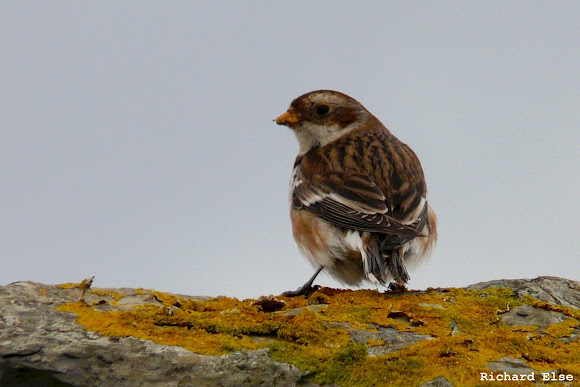 A small number of Snow Buntings have been present throughout the winter.
Posted by northronbirdobs at 20:26 No comments:

Despite a relatively calm and pleasant start to the month, there was little movement and almost no discernable change in the numbers and variety of birds from day to day. Up to 70 Skylarks were present every day, but other noteworthy passerines were minimal: a Meadow Pipit and a Song Thrush on the 3rd, a Robin on the 7th and a single Common Redpoll spending the week with the Twite flock at Kirbest. A couple of Peregrines were seen early in the week, up to three Grey Herons were around, a Water Rail was at Ancum Loch on the 7th, and Little Grebes were singing on territory there and on Brides Loch. Wader counts remained much the same, although Redshanks reached a peak of 71 and Oystercatchers 200 – both increases on the previous weeks. The three European White-fronted Geese remained and Shelduck and Tufted Duck numbers rose slightly to 10 and 35 respectively.
Finally, the elusive male Pheasant at Hooking made a rare and typically skulking appearance this week. The sole remnant of a small population that was introduced to the island in 1993, he appears to have been on his own since 2006 – the last year in which any other pheasants were recorded here. 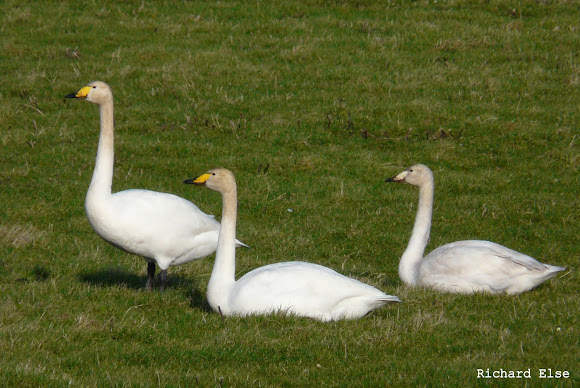 Six Whooper Swans have spent the winter at the north of the island. This is fewer than in most previous years. 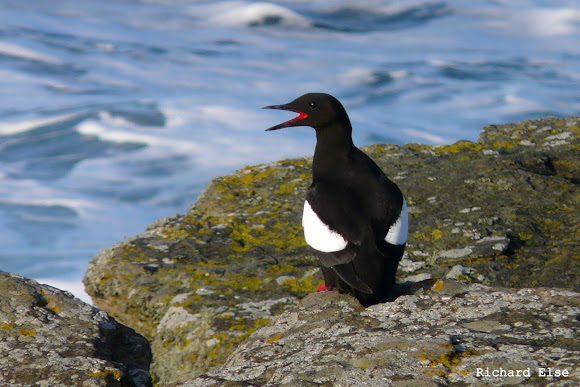 Black Guillemots started to return to the colonies this week, with more than 150 being seen on some days.