A Red-necked Phalarope showed well on Bewan on the 25th and 26th. Golden Plover’s have started to return and numbers built up to 50 by the end of the month.  A Storm Petrel ringing session on the 26th produced 18 birds, with the first bird in the net the first Leach's Petrel of the year. A Lesser Redpoll with a brood patch was caught several times at Holland and 5 recently fledged birds trapped and ringed on the 27th show that the species has bred on the island for a second year. Nest recording continues, with 20 Wheatear and 15 Sedge Warbler chicks ringed a lot more than are usually done. The first Black Guillemots have hatched and effort is now being put into ringing them as well as catching the adults, with over 60 trapped so far (the historical island total is only 37). This included some retraps of birds ringed as chicks in the past, the oldest being from 1994, two years off the UK longevity record. 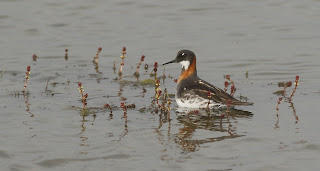 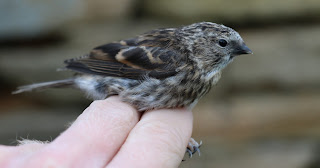 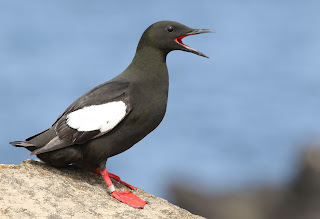 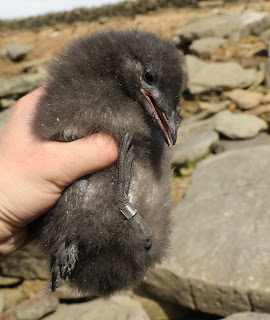 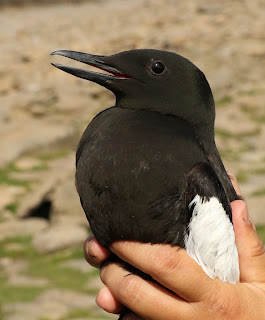 (All photos Euan Ferguson)
Posted by northronbirdobs at 23:14 No comments:

The only migrants of note were a Little Gull at Kirbest and a Pink-footed Goose at Hooking, both on the 13th, along with a few Spotted Flycatchers and Chiffchaffs, but spring migration is essentially over. However, we’ve been busy monitoring and ringing the many breeding birds on the island. Black-headed and Common Gull chicks have been ringed at the lochs as have Greylag goslings. The first visit to Artic Tern colonies suggests they should have a reasonable year.  And effort has gone into finding Wheatear nests with 13 located. 10 Eiders were ringed as was a Gadwall, only the second ever for the island. A Coot chick was also the second ever ringed. 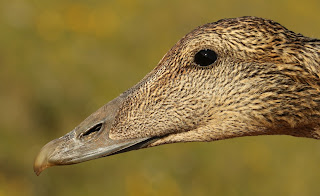 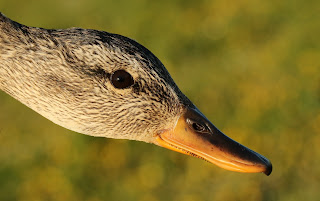 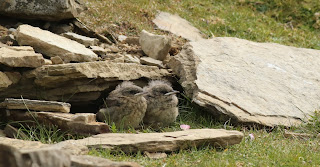 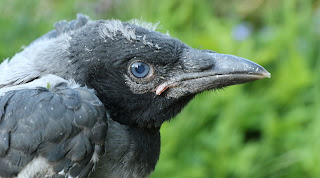 (All photos Euan Ferguson)
Posted by northronbirdobs at 22:45 2 comments:

The sunny spell continued as migrants became increasingly thin on the ground. A Grey Wagtail was seen at Gretchen on the 7th, and there was a Siskin at Holland. A Swift, Collared Dove, Chiffchaff and Spotted Flycatcher were all seen at Holland on the 8th. A pair of Red-necked Phalaropes were found on Gretchen on the morning of the 9th  and showed well before disappearing in the afternoon. A flock of Bar-tailed Godwits on Gretchen also on Gretchen has been slowly building up and reached 105 birds on the 9th, the highest ever count on the island for this species. Another Swift was seen from the Obs on the 10th and a Cuckoo was seen every day around the airport and Trebb. 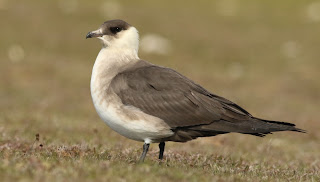 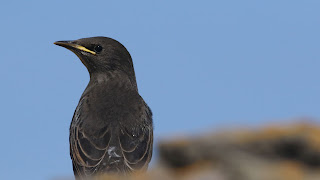 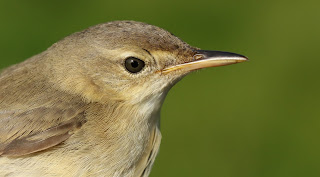 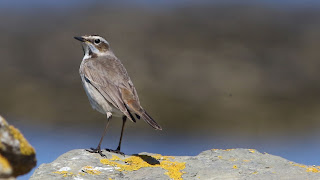 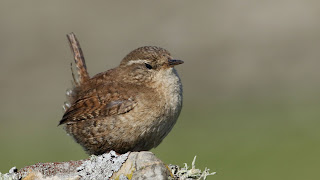 A Black Tern was a good find on the 31st, sitting amongst Arctic Terns on the beach at Nouster. A rare bird here, this was the 14th island record. A Black-throated Diver was also seen in Nouster bay, and the Red-backed Shrike was still at Ancum Willows. There were also singles of House Martin, Garden Warbler and Lesser Redpoll. With the winds turning northerly the first couple of days of June were very quiet, producing almost no passerine migrants at all. Heavy fog brought in some birds on the 3rd, the highlight being a male Bluethroat at the school. A Cuckoo was at Holland House and a flock of 73 Bar-tailed Godwits were on Gretchen. Also seen were 2 Woodpigeon, 1 Collared Dove, 1 Tree Pipit and 3 Chiffchaffs, including a possible Siberian Chiffchaff trapped and ringed at the Obs. The Corncrake was still present at Holland on all days. 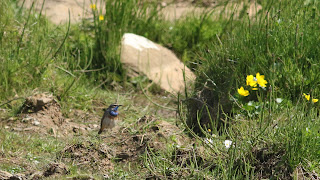 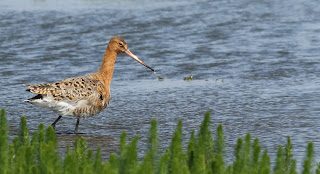 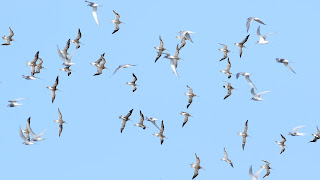 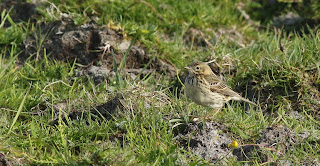 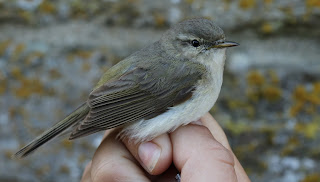 Possible Siberian Chiffchaff, a very grey bird that doesn't quite fit anything 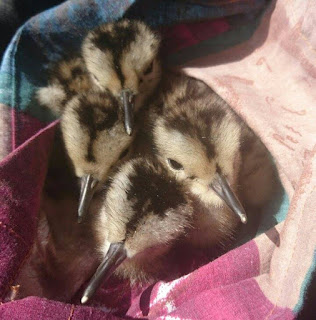 Posted by northronbirdobs at 22:09 No comments: