A glorious day with hardly a breath of wind and plenty of sunshine; most of the birds of note were Passerines which popped out in the calm weather around B and E and included 6 Robins, 34 Redwings, 10 Skylarks, 2 Reed Buntings, 9 Meadow Pipits, 16 Rock Pipits and 4 Snow Buntings.   Other birds of note comprised 6 Great-northern Divers and 16 Long-tailed Ducks off Stennabreck, 2 Whooper Swans and 2 Pintail on Ancum and 4 Herons. 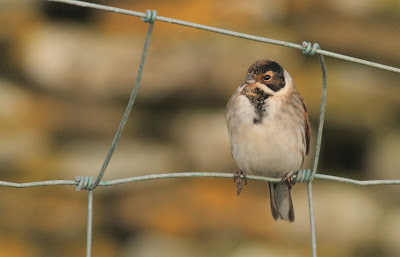 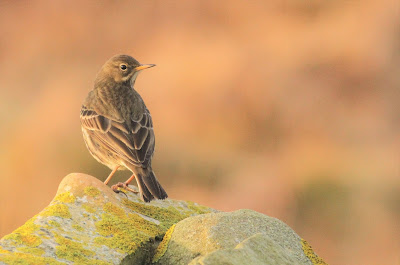 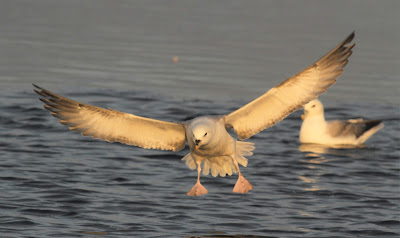 Posted by northronbirdobs at 15:15 No comments:

The wind mercifully died down from mid-morning on the 10th becoming very pleasant in the afternoon; birds round the coast from Gretchen to The Links included 10 Great-northern Divers, 6 Red-throated Divers, 3 Herons, an adult Whooper Swan by Brides, 35 Long-tailed Ducks, a female Common Scoter which flew past Nouster, 5 Red-breasted Mergansers, the wintering Grey Plover, 65 Ringed Plovers, 64 Sanderling, 84 Dunlin, 255 Purple Sandpipers and a Black-headed Gull.   Passerines which came out of the woodwork in the calm weather included 69 Snow Buntings, single Song Thrush and Fieldfare, 11 Redwings, 3 Skylarks, 6 Robins, 4 Meadow Pipits, 12 Rock Pipits and the Chaffinch still around Nouster.


A lovely day on the 11th with light northerly winds and plenty of sunshine (still cold though!); a productive two hour seawatch first thing comprised a Black-throated Diver with 9 Great-northern Divers and 3 Red-throated Divers, 922 Fulmars (with 11 Blue ones including a very dark, almost black looking individual!), 45 Kittiwakes, 6 Puffins, a single Little Auk and 3,431 Auk sp.   Other birds in the north included 14 Snow Buntings, 4 Goldeneye and 5 Pintail.


The Common Redpoll reappeared at The Lurn (presumably it will try and overwinter now) along with 4 more Snow Buntings, 2 Great-northern Divers and 8 Tysties. 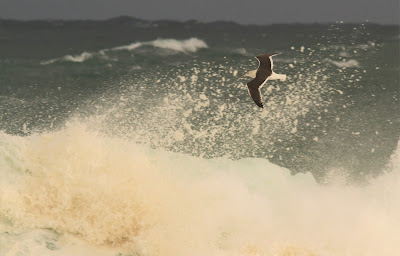 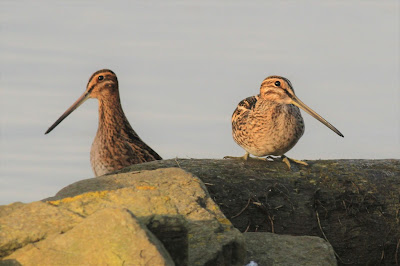 Posted by northronbirdobs at 16:23 No comments:

An incredible few days as Storm Caroline wreaked her foamy vengeance upon the island with storm force winds battering the Northern Isles; not much birding was done on the 7th as the winds reached their peak but some hardcore dazzling produced some good results after dark with a good selection of Gulls and waders caught.   We ventured out briefly on the 8th into the still gale force winds and wintery squalls with 2 Glaucous Gulls (an adult and a juvenile) off Brides in amongst good numbers of other Gulls, Ducks and Waders feeding along the marginally sheltered side of the island.


Still extremely windy on the 9th with huge waves and long, heavy snow and hail showers; a few hours spent at the top end produced the highlights of 3 Glaucous Gulls (two juveniles and a different adult) and a juvenile Iceland Gull (which may have had some kumlieni in there somewhere).   Other birds included 32 Snow Buntings, an increased 7 Goldeneye, 10 Pintail, 22 Bar-tailed Godwits and 21 Curlew. 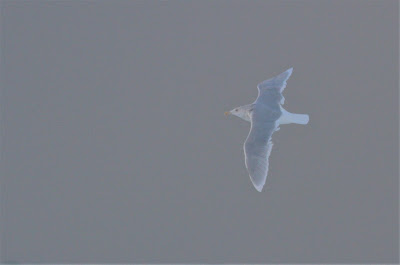 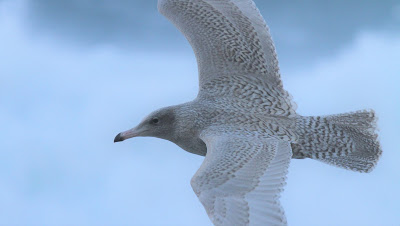 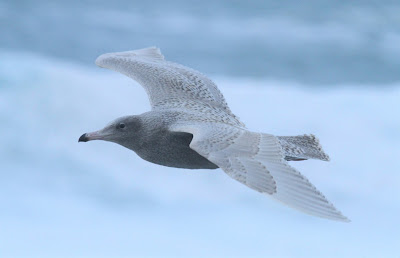 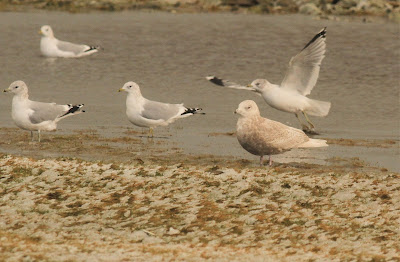 Posted by northronbirdobs at 17:38 No comments:

Still hard going out in the field with the strong W/NW winds bringing long periods of heavy, driving rain; a Sooty Shearwater passed the hide on the 4th during an hours seawatch along with 2 Great-northern Divers, 341 Fulmars, 38 Kittiwakes and 317 Auk sp. while 10 Gadwall, 7 Pintail and 2 Goldeneye were on Bewan.   There was pretty much nothing to mention on the 5th although the shrinking moon and increasing wind and rain produced a productive nights dazzling as the spoils included a Water Rail in Loch Park and the first Teal to be ringed this year at Bewan along with some Turnstone, Ringed Plover and Snipe.


More effort was put in on the 6th despite the pouring rain, as birds around the coast between the pier and Bridesness included a Great-northern Diver, 2 Herons, 145 Wigeon, 195 Teal, 12 Shoveler, 7 Long-tailed Ducks, 122 Lapwing, 80 Sanderling, 165 Purple Sandpipers, 80 Snipe, 81 Redshank, 95 Turnstone, 3 Black-headed Gulls (the first ones for several weeks!), 180 Common Gulls, 12 Rock Pipits and 9 Snow Buntings.   Elsewhere there were 3 Robins, 22 Redwings (a bit of an increase) and a Chaffinch, seemingly settling in for the winter around the Obs. 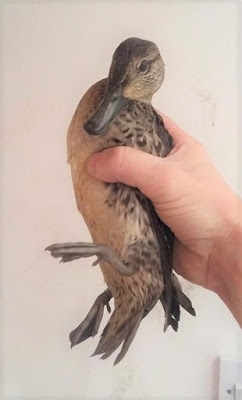 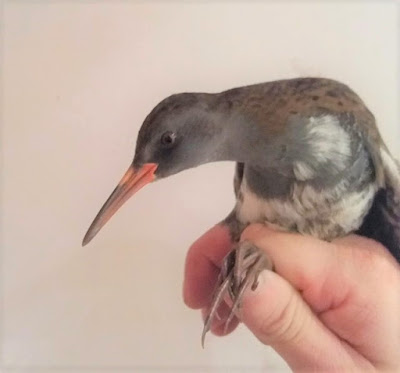 Posted by northronbirdobs at 21:21 No comments:

Brisk westerly winds through the 2nd with the expected wintery showers whipping through didn’t encourage much time out in the field but totals round the north end of the island included 4 Red-throated Divers, 6 Great-northern Divers, 13 Gadwall and 13 Pintail.   Still a strong W/NW wind sweeping across the island on the 3rd but it generally remained drier and brighter so more time was spent out and about; the potential highlight was a large Gull which flew through Nouster which showed many characteristics of a second winter American Herring Gull – we’ll have to see how far that gets in the system as I’m not sure it has the full suite of features to prove it either way… 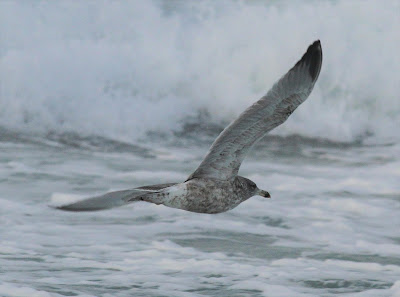 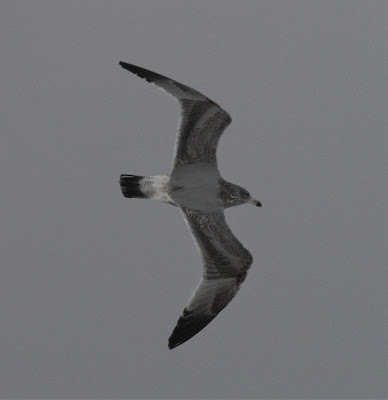 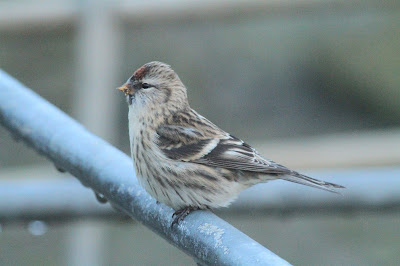 Still very cold, strong northerlies on the 30th with a Little Auk off Brides the only bird really worth mentioning.   A big change in the weather on the 1st with the winds swinging back into the west and dying down to almost nothing for a while but the change brought waves of mist, murk and drizzle which drifted in and out through the day; a seawatch first thing before the weather closed in produced a Sooty Shearwater (it’s amazing how late in the year they still pass the island!), 526 Fulmars (with one Blue one), 6 Great-northern Divers, 65 Gannets, 18 Kittiwakes and single Little Auk and Puffin with 674 Auk sp.   There were then 13 Pintail, 17 Gadwall and a Merlin around Bewan.


Other birds included a Water Rail around the Obs, still one Common Redpoll on the coast at The Lurn and 2 Pink-footed Geese by Holland before a look round Southness / Brides produced a Fieldfare, 7 Redwings, 4 Meadow Pipits, 2 Skylarks and 2 more Pintail while offshore there were 6 Red-breasted Mergansers and 9 Long-tailed Ducks. 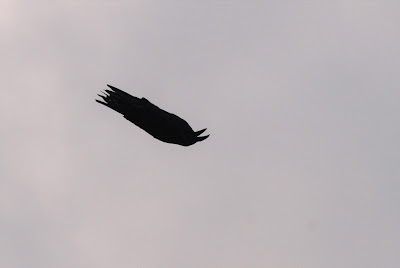 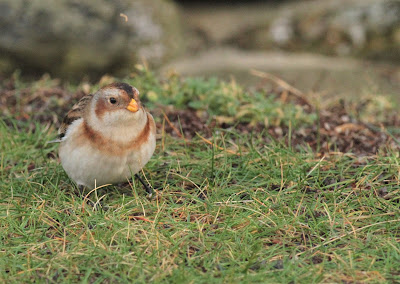 Posted by northronbirdobs at 20:47 No comments: