North Ronaldsay Bird Observatory would like to thank all of those who have visited and contributed to the Bird Observatory in this strangest of years and wish you all a Merry Christmas and a Happy New Year.
Thank You all and we hope to see you next year. 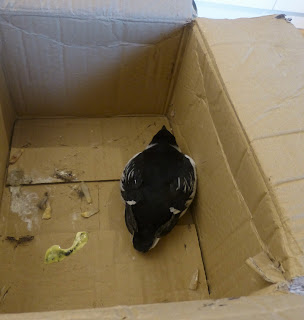 This Little Auk was a surprise Christmas present for one lucky islander, found on the doorstep early morning. It was lively and put back out on the sea.
Posted by northronbirdobs at 14:42 3 comments:

We finally got in on some Goose action with 3 Russian White-fronted Geese and a single Bean Goose sp. between Holland and Kirbist on 16th. Up to 4 Woodcock have been logged, there are still a few Fieldfare and Redwing scattered about, up to 11 Pintail have been on Gretchen Loch and 2 Jackdaws coming in off the sea at the pier on 23rd is only the second December record of this species.

Posted by northronbirdobs at 19:53 No comments:

The past couple of weeks have been wet and windy to say the least but there are still plenty of Geese to search through, though no White-fronted Geese so far. Three Iceland Gulls were amongst the masses of Great Black-backed and Herring Gulls on 8th, there are still a decent number of Redwings and Fieldfare for December and it appears a good number of Robins are going to spend Christmas on the Island. Up to 80 Twite remain in the Observatory bird crops and singles of Siskin and Common Redpoll were seen on 15th.

Posted by northronbirdobs at 13:07 No comments:

A rather quiet period of just under 10 days has meant there's not really a lot to shout about at the moment but we have had a few interesting bits to keep curiosity going and observers in the field.

A Sparrowhawk was seen briefly over Milldam on the 25th while the first wintering Shelduck returned to Gretchen on the 28th, a small increase in wildfowl numbers saw the Pintail count rise to 23 with most of the birds being on Bewan and Gretchen. A short sea-watch on the 1st of December produced a Little Auk and a Puffin. Other highlights have included the Green-winged Teal, up to 3 Hen Harriers, 2 Merlins, Short-eared Owl was seen on the 28th and there's decent numbers of Woodcock still hanging around. Other remainders of the Autumn are still lingering too; small groups of Redwing and Fieldfare are still present in hidden corners of fields while small numbers of Robins are still feeding around the Obs, Holland and Ancum Willows. The ever present flock of Twite in the obs crop has stayed at a pretty steady 40-50 birds, they've been joined by a number of Chaffinch over the last few days with up to 6 birds joining the flock. A Grey Plover that has also been present on Nouster beach for much of November has been seen most days. 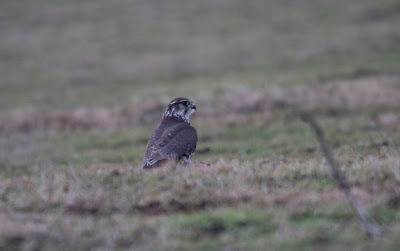 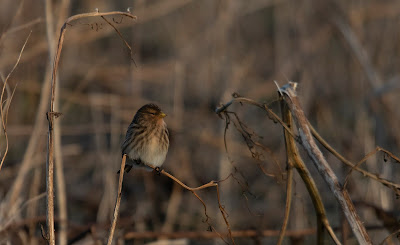 Posted by northronbirdobs at 17:01 No comments: