Predictably, any hint of snow had disappeared by the morning, leaving a lovely sunny, calm day; the calm seas allowed some improved counts to be made including 19 Great-northern Divers, a Black-throated Diver in Nouster and 24 Long-tailed Ducks while the Green-winged Teal also had a day at coast – being seen fast asleep, bobbing around in Nouster Bay.   Other totals through the day from round the Obs, Westness and the north end included 4 Herons, 5 Tufted Duck (they’ve been pretty scarce this January), 4 Red-breasted Mergansers (also smaller than average numbers recorded this month), a single Black-tailed Godwit at Ancum, a Meadow Pipit, 14 Rock Pipit, a Robin, 19 Redwing, 48 Twite (including three which came in off the sea from the south) and a total of 108 Snow Buntings in three flocks up and down the island. 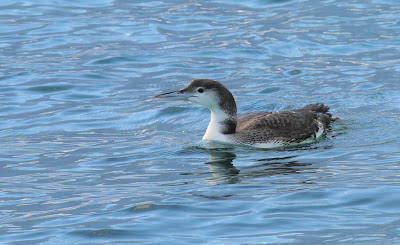 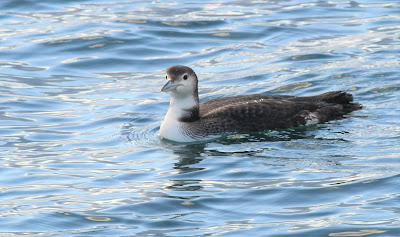 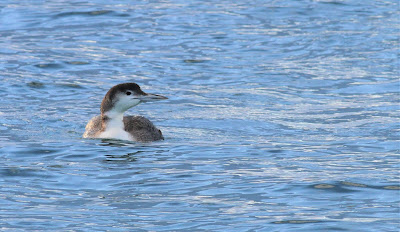 Posted by northronbirdobs at 18:35 No comments:

A nice morning with light winds and a bit of sunshine but a heavy spell of snow at lunchtime turned the island white and was followed by a succession of heavy winter showers through the rest of the day; a walk round Hooking and The Links in the morning didn’t produce too much new but totals included 3 Great-northern Divers, 3 Herons, the Eurasian White-fronted Goose still, 170 Teal, a Merlin, a Grey Plover, 25 Sanderling (including six colour-ring combinations read), 100+ Snipe, 20 Bar-tailed Godwit, 2 Meadow Pipits, 3 Fieldfares, 14 Redwing and a Song Thrush.   A drive round in the afternoon through the snowy wilderness then added 4 Gadwall, 11 Pintail, 14 Shoveler and the drake Smew on Bewan to the day list. 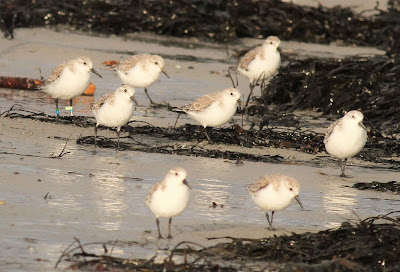 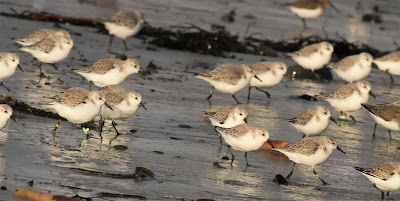 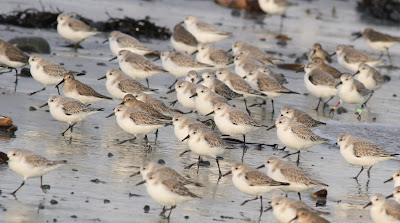 Posted by northronbirdobs at 17:24 No comments:

A lovely day, still chilly but light SW winds and plenty of bright sunshine; a walk round the south of the island produced an immature Mute Swan which flew out south, the 2 Pink-footed Geese still, a Shelduck, 9 Shoveler, the Water Rail still in Holland, 273 Golden Plover, 22 Skylark, a Meadow Pipit, 45+ Twite, 2 Common Redpolls and 82 Snow Buntings.   Birds seen during a drive around the lochs in the afternoon then comprised an increase to 6 Black-tailed Godwits on Brides, 26 Bar-tailed Godwits (presumably the wintering flock but they haven’t been seen this year yet), 4 Ruff in fields by Southness, 11 Pintail, 4 Goldeneye, 2 Hen Harriers and another 22 Snow Buntings at Bewan creating a year’s high count of 104.

Posted by northronbirdobs at 17:54 No comments:

Not a bad day with a moderate NW wind decreasing through the day and a few snowy, haily showers drifting across the island; I got around a good part of the island today where the highlight consisted of two Black-tailed Godwits on Brides Loch (an unusual winter arrival).   Other totals included 6 Great-northern Divers, 6 Herons, 2 Pink-footed Geese with a total of 742 Greylag Geese, 2 Shelduck, 244 Wigeon, 5 Gadwall, 148 Teal, 5 Pintail, 15 Shoveler (the highest count of the year), 4 Goldeneye, the drake Smew still on Bewan, 2 Hen Harriers, 18 Skylark, the 5 Chaffinches and 87+ Snow Buntings. 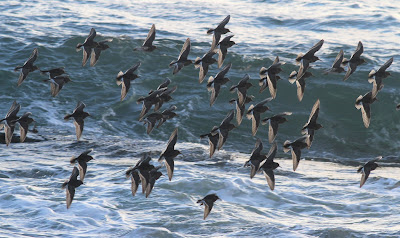 Posted by northronbirdobs at 18:27 No comments:

An overcast day with a moderate NW wind and a few showers coming through from time to time; it was quiet in the field with the highlights of a walk round the coast from The Obs to The Links comprising a Woodcock along the wall on Bridesness Point and an adult male Peregrine north along the coast at Stennabreck.   Other totals included 75 Cormorants, 4 Herons, the Eurasian White-fronted Goose still, 2 Shelduck, 247 Wigeon, 174 Teal, 9 Shoveler, 10 Long-tailed Ducks, 5 Red-breasted Mergansers, a Hen Harrier, 223 Lapwings, 142 Purple Sandpipers, 59 Dunlin, the 5 Ruff still at Hooking, 64 Snipe, 147 Redshank, 93 Rock Doves, 5 Skylarks, 6 Fieldfare, 16 Redwing, 52 Snow Buntings and 4 Reed Buntings


A little drive up to the north end in the afternoon then produced the drake Smew back on Bewan (reports suggest he’s been spending time on Sanday), 2 Goldeneye and 2 Pintail. 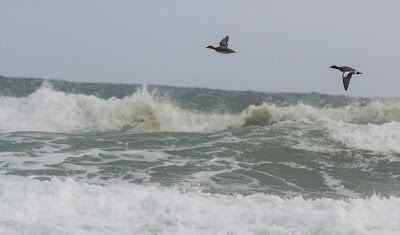 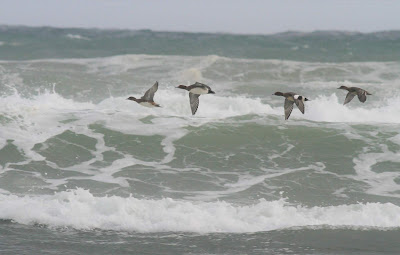 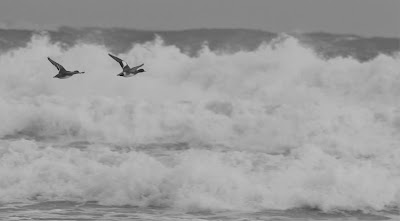 Posted by northronbirdobs at 18:16 No comments:

A different day than yesterday with lightish NE winds, overcast conditions and long periods of drizzly rain becoming angry hail showers later in the day; a walk around the southern end of the island produced 4 Great-northern Divers, 2 Pink-footed Geese with the Greylags, the drake Green-winged Teal again on Gretchen, 7 Shoveler, 7 Long-tailed Ducks, a Merlin and 69 Dunlin.   Other wintering totals included a Water Rail and a Woodcock in Holland, 19 Skylarks, 3 Rock Pipits, 2 Song Thrushes (Holland and Lurand), the 5 Chaffinches, 78+ Twite, 3 Common Redpolls (first overwintering birds since 2010 / 11) and 51 Snow Buntings. 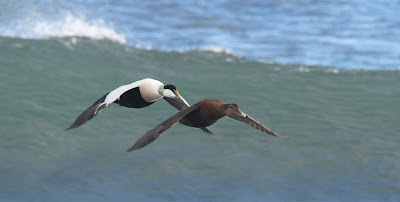 Posted by northronbirdobs at 17:44 No comments:

A rough day with strong westerly winds and numerous nasty squalls blasting across the island; effort was slightly down but birds seen around the Observatory and during a couple of hours at the north end included the Eurasian White-fronted Goose still, a Shelduck, 4 Pintail, 5 Gadwall, a Hen Harrier, 76 Ringed Plover, a Knot, 49 Dunlin, 2 Fieldfare, 15 Redwing and 91 Snow Buntings in two flocks – although I couldn’t re-find the colour ringed bird. 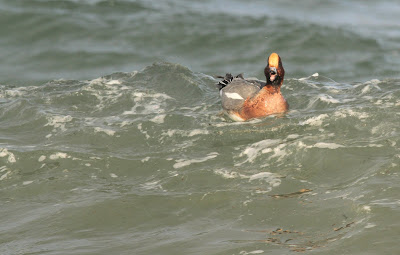 Posted by northronbirdobs at 16:21 No comments:

Another lovely day with light winds and plenty of sunshine but clear skies overnight produced a very cold morning with a thick frost and frozen lochs; totals seen during a walk round the middle of the island including Torness and Westness  comprised 3 Whooper Swans in from the south, the Eurasian White-fronted Goose again, a Hen Harrier, 83 Oystercatchers, a good 564 Golden Plover, a single Knot, 60 Snipe, 84 Curlews, a Black-headed Gull, 19 Skylarks, 3 Meadow Pipit, 12 Rock Pipits, a Robin, an increase in Thrushes (or maybe they were just enjoying the fine weather) with a Song Thrush at Holland, 44 Blackbirds, 18 Fieldfares and 34 Redwing and a flock of 60 Snow Buntings at Nether Linnay. 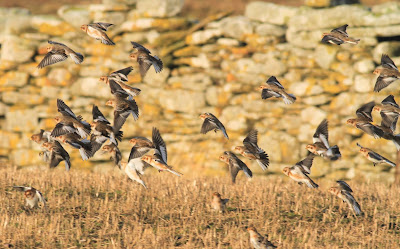 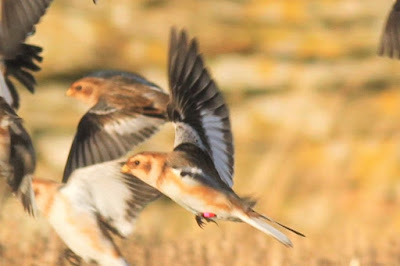 Posted by northronbirdobs at 18:36 No comments: 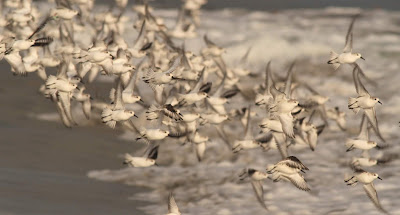 Posted by northronbirdobs at 19:10 No comments:


Also seen through the day at the north end and around Brides were the Eurasian White-fronted Goose again near Holland, 2 Whooper Swans, 9 Rock Pipits, a Robin, 2 Fieldfare, 12 Redwing and 20 Snow Buntings. 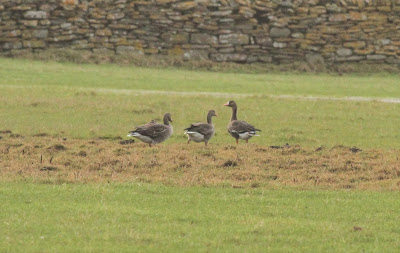 Posted by northronbirdobs at 16:50 No comments:

Arrived back on the island on the middle flight  where it was bright and dry with a brisk, cold SW wind; the highlights of a few hours round the south of the island included the drake Green-winged Teal on Gretchen where there were also 2 Shelduck, 7 Shoveler, and 3 Pintail, an adult Eurasian White-fronted Goose and 2 Pink-footed Geese with the Greylags and 2 Hen Harriers floating around while over-wintering Passerines lingering from last year included c88 Twite, 3 Common Redpolls, 5 Chaffinches, 9 Skylark, a Meadow Pipit, 2 Fieldfare, a Redwing and 42 Snow Buntings.


Other birds included 5 Red-throated Divers, 3 Great-northern Divers, 5 Long-tailed Ducks, 239 Golden Plover, c25 Dunlin, 47+ Curlew and 52+ Redshank.   A little drive up the island as it was getting dark then produced 2 Whooper Swans, another Shelduck and Pink-footed Goose, 4 Gadwall and another 20 Snow Buntings at Bewan. 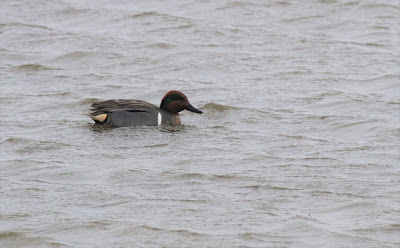 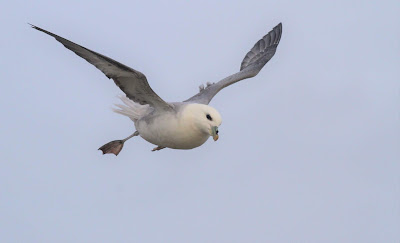 Fulmars were all around the coast playing in the wind

Posted by northronbirdobs at 17:16 No comments:

A return to the island for Hogmanay meant we had observers on the island for a short period at the back end of 2018 and the beginning of 2019.
On return to the island there wasn't too much to shout about, various groups of Snow Buntings were scattered about totaling 110 birds and a trip to Westness produced a 3rd Winter Glaucous Gull on the 28th. A small group of Pink-footed Geese were present behind Lurand into the new year. A lack of Gulls was a little concerning until a big group was present on the 31st and included 3 Iceland Gulls and 2 Glaucous Gulls, a welcome surprise!
With not a lot else about until 2019 we'll skip forward until then!

New years day brought about a series of sore heads and a whole host year ticks, unsurprising on both fronts really!
A return of the drake Smew on Hooking was a very welcome addition to everyone's year list as were a group of 5 Ruff, highly unseasonal but much appreciated! Other notable additions between the 1st and 3rd included a Kestrel, 2 Hen Harriers, a Grey Plover at Howar and a Shelduck at Westness. Away from birding we put in some effort to try and catch some Snow Buntings at Bewan, it proved a success over the course of 2 days and we managed to catch 21 birds, the island year record is 32 so we're doing alright already!

Posted by northronbirdobs at 23:05 No comments: