Hooking loch revealed an interesting insight today, an owl pellet was found by the edge of the loch. Examination of the pellet suggests it came from an Eared Owl species but unfortunately no owl could not be found on the island. The drake Smew and 5 Eurasian White-fronted Geese could also be found around Hooking along with 3 Whooper Swans. Other figures from today include 50 Tysties, 131 Lapwing, 63 Dunlin, 8 Sanderling, and a Chaffinch.

A sunny yet chilly Valentine's Day highlights include the drake Smew and a ring-tailed Hen Harrier at Hooking loch. Large flocks of waders were seen on the Links with 50 Ringed Plovers, 29 Sanderling, and 28 Bar-tailed Godwits all feeding along the shore line.

The flock of 6 Snow Buntings are still hanging around the north end of the island. A juvenile Iceland Gull and Glaucous Gull could also be found on the north side of the island. Diver numbers have remained similar over the past few days with today's count being 7 Red-throated Divers and 9 Great Northern Divers. Counts from today include 5 Shelduck, 123 Eider, 6 Long-tailed Ducks, a ring-tailed Hen Harrier, a Peregrine Falcon, and 99 Tysties. 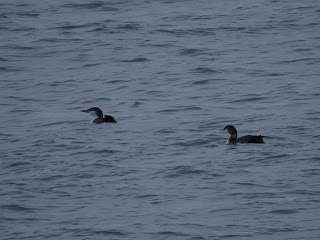