A lovely day, almost flat calm with varying cloud cover, great to be out in the field; the undoubted highlight of the day (and autumn) was a wonderful female SIBERIAN RUBYTHROAT found in the garden at Purtabreck by Pete Donnelly as he had a cup-of-tea and gazed out of the window, it had disappeared by the time everyone else rocked up but within the hour it had been re-found next door at Antabreck and showed well to everyone – the [some might say overdue] first for the island!   Other birds through the day included the adult Black-throated Diver in Nouster again, the drake Green-winged Teal still, a Hen Harrier, a huge female Peregrine, single Grey Plover and Woodcock, a bit of a late influx of 17+ Meadow Pipits, 18 Robins, 2 Siberian Chiffchaffs – one at Ancum Willows and a new one in Funny Park, 2 Brambling, 74 Twite, a Common Redpoll and 8 Snow Buntings. 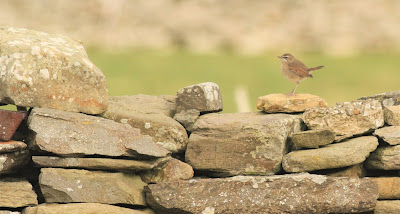