A fog filled few days left us a little frustrated at the start of the week but eventually the weather cleared itself up and the early signs were somewhat promising that we might get a few migrants, however this quickly faded and it seems the fog has scuppered our chances of late August rares for the time being.

With the 23rd mostly fog bound birding was difficult to say the least, the American Golden Plover was and still is present in the fields around Holland, a short absence was only due to us not being able to see the Golden Plover flocks! Things seemed like they were picking up though as the late afternoon produced the first Pied Flycatcher of the Autumn at the back of the Shooting Gallery and a Kestrel over Brigg. An arrival of Ruff peaked on the 25th with 25 birds scattered across the island, the first juvenile Grey Plover was on the beach at Howar and a Little Stint was on Gretchen.

Sea-watching totals have been fairly steady but with Tuesday and Wednesday mostly foggy the sea wasn't really an option but the 26th produced good numbers of Sooty Shearwater and Kittiwake to feed the appetite of the visiting sea-watchers! The first Tree Pipit of the Autumn was at Ancum also on the 26th and a small smattering of Willow Warblers gives an indication that birds might be arriving in dribs and drabs.

With the weather looking largely settled for the next few days it doesn't feel like anything is going to pop out anytime soon, but with September looming on the horizon the rarities can't be that far away....right? 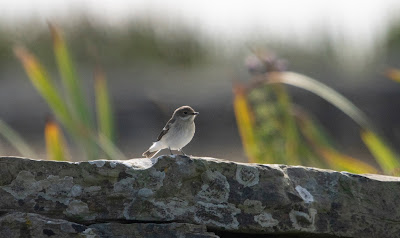 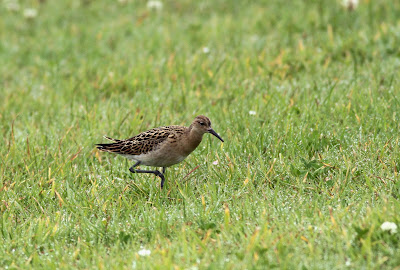