The south easterlies from the 30th October, continued into the morning of the 31st producing further arrivals of late autumn migrants. The winds then dropped off, producing a calm day on the 1st November, which coincided with the discovery of one of the highlights of the autumn. Reasonable numbers of common migrants remained on the 2nd, although a strengthening north westerly wind and rather grim conditions led to a bit of a clear out on the 3rd.

Over 300 Redwings remained on the 31st, with a slight increase in Fieldfare amongst them. Despite this, totals for this species still remain low this autumn, a feature which appears to be happening across the UK. In addition to this, there were small numbers of Woodcock and Siberian Chiffchaffs. A northern acredula-type Willow Warbler was also present at Milldam and the Richard's Pipit at Senness was joined by another individual.

The morning of the 1st produced a late autumn rarity in the form of a large pipit sp., which we can now confirm as Orkney's first Blyth's Pipit (pending acceptance of course). First discovered in the field south of Holland, the bird proved highly mobile, flying north to the area around Milldam before it was lost around South Gravity. Initial impressions of the bird were of a compact, short-tailed bird - it wasn't immediately obvious that it was a large pipit, giving off a feel similar to smaller pipit species. The bird then flew off calling, giving short high pitched "chup" notes. Being unlike any Richard's Pipit call, this certainly sent the alarm bells ringing! Rediscovering the bird around Milldam, we were able to obtain some record shots and crucially a sound recording of the bird's call. Due to the identification challenge large pipits can provide, we decided to take our time with the ID and ask for advice from others who are more experienced with this species. We're very thankful to everyone who provided help on this bird! The features allowing the bird's identification are summarized below - please note this is only intended as a quick summary and not a full description style piece. 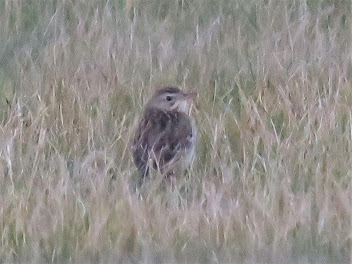 The bird's mantle is rather dark and distinctly streaked. The crown is also entirely dark streaked, giving the bird a dark-capped appearance.  Bill appears spiky with a straight culmen (Richard's tend to show more robust thrush-like bill with a decurved culmen). Pale lores and rather weakly defined supercilium behind the eye.
Overall structure and jizz: rather compact bird, clearly smaller than a typical Richard's Pipit, and with a rather short tail. The bird's small size and compact proportions were particularly noticeable in flight. Different impression to Richard's Pipit, which typically appear large and lanky, giving off explosive "shreep" calls during their conspicuous, bounding flight - initial impression of this bird meant it wasn't obviously a large pipit at first!
However, there is significant overlap in the plumage features between Blyth's and Richard's Pipits, with many features being variable. The existence (and occasional occurrence in Britain) of smaller Richard's Pipits complicates matters further still when relying on plumage and structural features alone for identification. Consequently, call is a much more reliable method of identification. Thankfully, we were able to obtain a sound recording and produce a sonagram from this, illustrating Blyth's Pipit's classic "chup" calls and confirming the identification.

This sonagram illustrates 3 "chup" calls - the first being slightly longer (indicated by white X mark), followed by two slightly shorter calls (indicated by white asterisks *). The calls create sharp triangular shapes, with a structure described by Magnus Robb as a "tentpole" on the Sound Approach wesbite: https://soundapproach.co.uk/call-identification-of-europes-first-paddyfield-pipit/.
Additionally, the two Richard's Pipits were still present at Senness and there was a scattering of common migrants around the island - a late Pied Flycatcher at Southness, 4 Siskins, 7 Blackcaps and 5 Chiffchaffs (including 4 Eastern-types), plus similar numbers of thrushes to the previous day.
Notable highlights on the 2nd included a Grey Plover, 2 Goldfinches and 20 Blackcaps, with at least one Richard's Pipit still present at Senness. The Blyth's Pipit was still nowhere to be seen unfortunately. The 3rd was a largely unbirdable day, although there was a notable clear out of thrushes, with less than a hundred Redwings noted. The recent run of easterlies appear to have come and end for now, with a westerly airflow returning. Whilst this doesn't look likely to bring large numbers of migrants, November always has the potential to turn up some top quality so we won't rule anything out!
Posted by northronbirdobs at 20:33

Nonetheless I am here now and would just like
to say many thanks for a marvelous post and a all round interesting
blog . many have been looking for a way out in un bearable marriages . While doing some research , I fell on this HOW TO EASILY OBTAIN FAKE DIVORCE PAPER ONLINE TO SAFE YOUR LIFE FROM CRAZY PATNERS Article that changed my life and circle and made me have a new life legally with the help of the octopus tickets for valid divorce papers .I have saved it and also added your RSS feeds, so when I have time I will be back to read much more, Please
do keep up the fantastic work.