A period of atrocious weather was very productive for getting up to date with IPMR and rarity descriptions; It was not, however, very productive for practical field ornithology. A Sparrowhawk on the 24th was just about the only new migrant recorded, and a flock of 34 Long-tailed Ducks sheltering in Linklet Bay on the 27th was a notable count; but the few other birds that were seen were presumably those that had failed to fly south before the gales and hailstorms hit: 10 Tundra Bean Geese were still around on the 24th, up to 27 European White-fronted Geese and the Barnacle Goose were present throughout, and 1 of the Woodpigeons was still near the observatory. 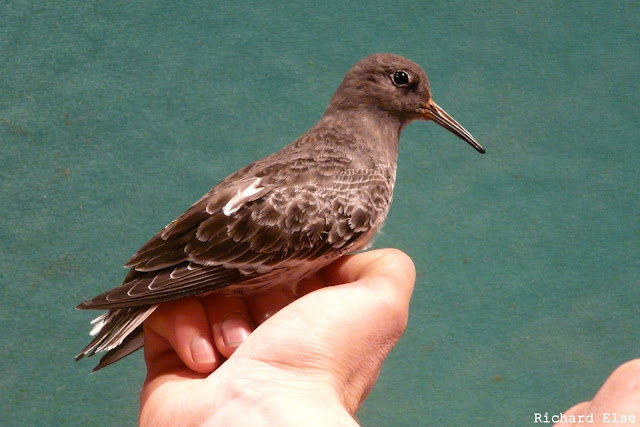 We have done our best to take advantage of the rough weather and have been out catching waders on Gretchen Loch most nights. Several Purple Sandpipers, Turnstones and Golden Plovers have been ringed, along with a few Sanderlings and Ringed Plovers that have been roosting in Nouster Bay.
Posted by northronbirdobs at 20:48