Although a day of frustratingly difficult, windy and wet birding conditions got off to an exasperating start with a large (although perhaps not that large) pipit sp. and a warbler (probably Acrocephalus) sp. both evading identification in the irises at Ancum Loch, all was forgotten a short time later when the call came through of a male Desert Wheatear on the west coast. This is a new species for North Ronaldsay and the fourth record for Orkney. 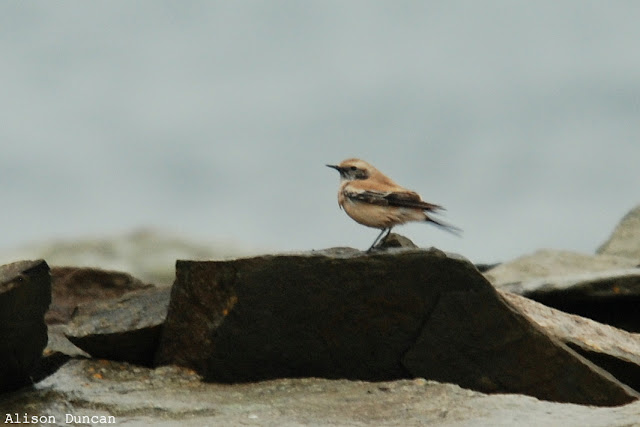 Desert Wheatear
There had clearly been another arrival of thrushes on the island, with 1196 Fieldfares, 304 Redwings, 219 Blackbirds, 33 Song Thrushes and 2 Ring Ouzels recorded; and a variety of other passerines included a late Swallow, 6 Black Redstarts, 10 Robins, 5 Wheatears and the usual Short-toed Lark. A late Great Skua, a juvenile Iceland Gull and an adult Little Gull were seen, as well as 12 Woodcocks, 2 Short-eared Owls and a Long-eared Owl.
Posted by northronbirdobs at 15:05