Settled still with generally light winds, plenty of sunshine and continuingly dry conditions – many lochs have or are in danger of drying up!   A good selection of waders on the 3rd included 45 Purple Sandpipers (the first returning birds arriving en masse), 87 Golden Plover, 37 Dunlin, 2 Black-tailed Godwits, 42 Bar-tailed Godwits, a Whimbrel and 80 Redshank.


Other birds included a Sandwich Tern, a Collared Dove, a single Swift over the Obs and a couple of Chiffchaffs still in Holland.   Also of note was a Hummingbird Hawkmoth seen on The Links associated with a little arrival of Butterflies including 14+ Painted Ladies and 11 Large Whites.


A seawatch in the afternoon of the 4th produced the first Sooty Shearwater of the year along with 7 Manx Shearwaters, a Storm Petrel and 475 Puffins in an hour and a half.   Other little bits included 2 Sandwich Terns, the Heron still, a returning flock of 7 Wigeon on Ancum and the first Fulmar chicks starting to hatch.


A Spotted Flycatcher was an unusual July record in Holland while the female Garganey was seen again on Brides (but again, no chicks were seen) and two male Ruff on the rapidly disappearing Gretchen were the first returning individuals. 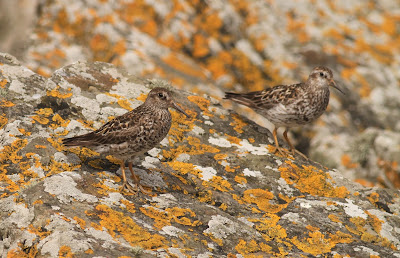 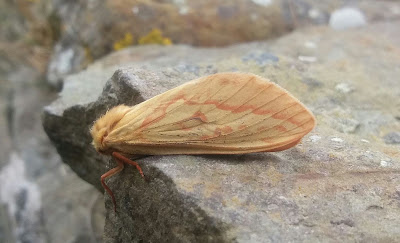