Calm and overcast first thing with light rain moving in at lunchtime which persisted through until late afternoon; it felt really promising, that you could bump into anything out in the field, the pick of the new birds were (in keeping with the rest of east coast today) 2 Bluethroats – both males at Viggay and Rue while the Eastern Subalpine Warbler was still around the Obs and the 5 Dotterel were still at Burray. 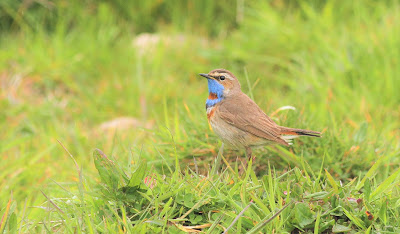