The large groups of thrushes are slowly dissipating but still good numbers of Fieldfare and Redwing remain on the island. 6 Whooper Swan left the island early in the day on the 29th while 3 Greenfinch were hanging around at Sangar. A Grey Wagtail was also near the obs. A few lingering Robins and Blackcaps were still present on the island.

The next couple of days were plagued with winds reaching over 50mph and driving rain, not ideal conditions and it proved so with a general lack of birds. The main talking point was the increase in Gull numbers with over 200 Herring Gulls and 120 Great Black-backed Gulls around Bewan. 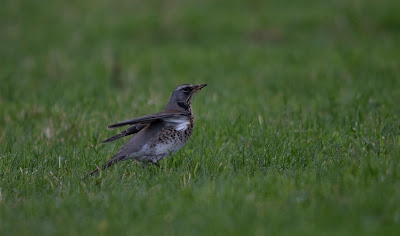