It’s been a few days since our last post so apologies for that, I’d like to say you’d missed a lot but it’s mostly been dramatic weather and overstaying birds that have kept us entertained.
The 3rd started with news of an Olive-backed Pipit near Stromness Point, it’s assumed that it’s the Stennabreck bird having moved South slightly. Two Yellow-browed Warblers were still in Holland while the first flock of Pink-footed Geese, thirteen in total, over the last few days moved South past the Beacon. The stubble patches at Westness provided two Lapland Buntings and three Brambling. The Buff-breasted Sandpiper also remained in a favoured spot just West of North Manse. The 4th saw a huge influx of Redwing onto the island, after the rain cleared mid-morning we were treated to just over 2500 birds in the space of four or five hours. The long-staying Hornemann’s Arctic Redpoll also remained around the Shooting Gallery while a Yellow-browed Warbler, Siberian Chiffchaff and two Robins remained in Holland. The big birds of the day were Sixteen Whooper Swans on Hooking, surprisingly even at this stage in 2022, a year tick!
Wednesday the 5th started with news from Sanday of two Jackdaw heading our way, not a major rare like some of the other corvids, but scarce all the same. They were eventually picked up near the Lighthouse as they continued North. The Turtle Dove re-surfaced once again, this time at Westness! Two Hornemann’s Arctic Redpoll were seen initially at Lochend in the North before relocating down the island and eventually settling at Howar, there was a Ring Ouzel on the West coast and four Whooper Swans headed South out towards Sanday and a third Hornemann’s appeared, assumedly the same as in previous days, near the Post Office.
The 6th saw horrendous showers, gales and even a crash of thunder that woke most of the staff up! It also saw us say goodbye to Aidan, his visit cut shorter than we’d like due to family reasons. We wish him all the best in his future endeavours and look forward to seeing him again in the future! Bird wise things were predictably tortuous in the blustery conditions but some brave souls did venture outside! Sixteen Barnacle Geese were on Gretchen first thing while a further were around the Links. c160 Pink-footed Geese moved through in small flocks as the afternoon progressed as did seven Whooper Swans, on the land the Stonechat was near the school and the Ring Ouzel was near the foghorn. 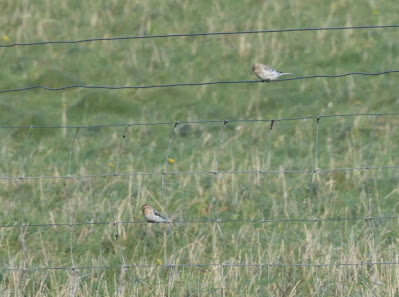 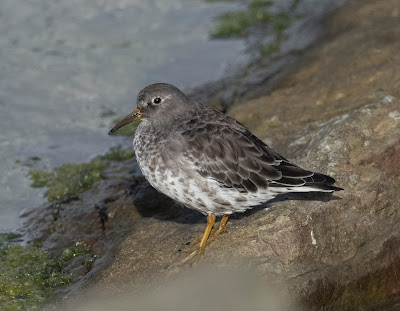 Purple Sandpiper
Posted by northronbirdobs at 10:30