Windy again on the 15th but it was a decent day in the field with an excellent arrival of 168+ Whooper Swans the main feature, birds arrived through the day and by the end of the day there were 160 roosting on Ancum; other wildfowl included 785 Greylag Geese on the move, 198 Wigeon and the Green-winged Teal still.


The day’s other highlights included the Buff-breasted Sandpiper still on The Links, the Red-breasted Flycatcher and Siberian Chiffchaff in Holland, the Arctic Peregrine again and a late adult Arctic Tern in Linklet Bay while other migrants comprised 412+ Redwings, 4 Swallows, 6 Robins, 27 Wheatears, 3 Blackcaps, 2 Chiffchaffs, a Goldcrest, 7 Chaffinches, 5 Bramblings, a Lapland Bunting and an increased 22 Snow Buntings. 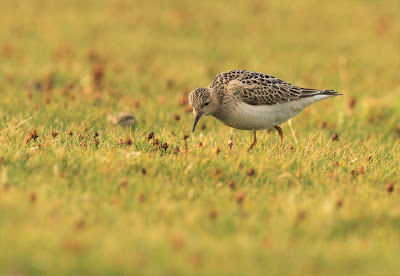 The wind mercifully and wonderfully dropped off to almost nothing overnight and swung round into the east by lunchtime producing a brilliant day out and about but then almost as instantly, the wind picked up to force 8 with rain by late afternoon.   As yesterday, the record breaking total of 267 Whooper Swans was the main feature of the day with big flocks roosting on Ancum and Brides before noisily and brilliantly making their way further south; other wildfowl included 42 Barnacle Geese, a Pintail, 75 Tufted Duck, 6 Long-tailed Ducks, 7 Red-breasted Mergansers and the first 3 Goldeneye of the autumn.


Scarcities through the day included the Buff-breasted Sandpiper, Red-breasted Flycatcher and Barred Warbler all still in place, the first Black Redstart of the autumn and randomly, an Ocean Sunfish drifting past The Lurn!   Landbirds were mainly lingering birds with a Kestrel, 2 Merlins, 17 Rock Pipits, a Grey Wagtail, 5 Robins, a Dunnock, a late Whinchat, 14 Wheatears, 500+ Redwings, 2 Lesser Whitethroats, 6 Blackcaps, 2 Chiffchaffs, 3 Willow Warblers, 3 Chaffinches, 15 Bramblings, 5 Lapland Buntings, 6 Snow Buntings and a flyover Crossbill.   The pick of the waders comprised 32 Black-tailed Godwits still, a Jack Snipe, 78 Sanderling and 3 Ruff. 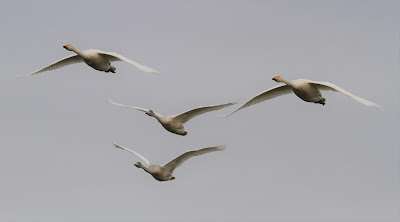 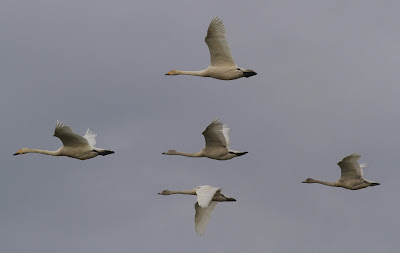 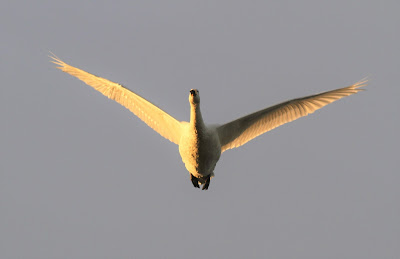 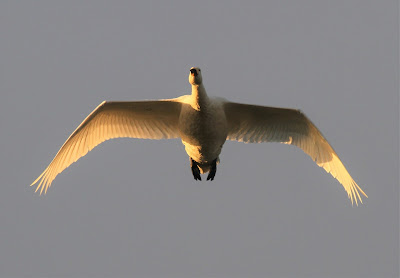