A lovely day on the 18th with much calmer conditions and plenty of bright sunshine; a look from the seawatch hide first thing produced the day’s highlight of a fine White-billed Diver bobbing around in front of the hide from where it drifted off north up the coast.   In the calm seas we managed a few increased counts of other species including 11 Great-northern Divers, a good count of 322 Eiders (higher than any counts last year!) and 18 Long-tailed Ducks.


The Kumlien’s Gull remained in the Brides area before floating to Nouster in the afternoon and the morning’s seawatch also produced 342 Auk sp. in an hour.


The 19th was a totally different day with overcast conditions giving way to persistent rain which moved in from mid-morning and lasted the rest of the day; it was still fairly calm though first thing allowing at least 200 Black Guillemots to gather just offshore and begin to display to each other – it won’t be long before they start to come ashore!   Other birds through the day were limited but included 3 Great-northern Divers, the Green-winged Teal still, 60 Snow Buntings and 2 Knot with 190 Golden Plover in Loch Park. 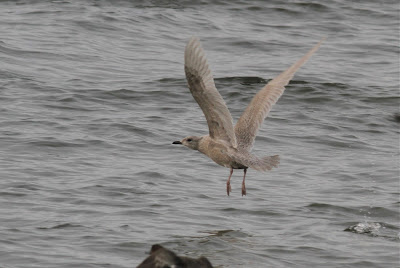 With nothing else leaping in front of the camera, here's another picture of the Kumlien's Gull!