A mixed bag weather wise turned up a few migrants along the way, things haven't started migration wise in a big way yet but it won't be long!

The 12th saw a day of howling 50mph gusts and prolonged wet spells that made being out an unpleasant experience, that said the birds didn't seem all that bothered and all in all it was a good day out in the field. The day started with our second Pectoral Sandpiper of the year feeding with the Dunlin at Bewan. It was quickly joined by the Baird's Sandpiper, the two making a rather nice combination. A Short-eared Owl was battling the high winds near Rue while a Common Tern was hanging around the point at Brides while small groups of Lapland Buntings and lone Snow Bunting were dotted around.

The 13th saw the arrival of our first Heatherlea group of the year, it's been good to see a few familiar faces. It also saw the arrival of the our first Robin of the Autumn at Holland, a Barred Warbler was also seen briefly in the gardens. Good numbers of Lapland Bunting and Rock Pipit arrived throughout the day with both posting totals of over 30 for the day. A pod of 10 Risso's Dolphin tracked North from the Beacon. A lighthouse attraction somewhat smaller than the one of three years ago saw around 50 Meadow Pipits attracted to the lighthouse disorientated by a low fog that had descended in the evening.

The 14th was a lovely day weather wise but it ended up being quieter than we'd have wished. The Baird's remained on Bewan with a Curlew Sandpiper. Flocks of Lapland Bunting continued to track South throughout the day. a Willow Warbler and the Barred Warbler were both seen in Holland, a Garden Warbler was at Milldam the evening saw us treated to another pod of Risso's Dolphins off the pier and a colour ringed Hen Harrier was photographed near Hooking. 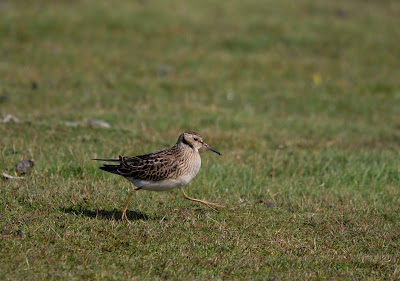