A superb period in which promising weather bought in some good birds and such much needed migrants.

The 18th started with light winds and drizzle that eventually turned into a light mist, this undoubtably dropped in the first spell of birds. Things started with a Yellow-browed Warbler at Holland followed by one at the Manse before things began to kick off and the day produced a fine haul of migrants a further two Yellow-browed Warblers pushed the day total to 4, a Reed Warbler was between North and South Gravity as was a Chiffchaff, 2 Willow Warblers and a Common Whitethroat, a further Chiffchaff was in Holland. The Baird's Sandpiper was joined by a Little Stint at Bewan. Other migrant totals included 8 Blackcaps, 5 Pied Flycatchers, 7 Willow Warblers, 2 Goldcrests and 2 Tree Pipits. An Unstreaked Acro at Garso remained unidentified due to it's skulky nature and wasn't around the following morning. It seemed Little Buntings at North Gravity and 2 at Stennabrek would be the highlights for the day until a Red-throated Pipit was found feeding around the Irises near Bridesness, a superb end to a superb day!

The following day was met with anticipation and it delivered. The Red-throated Pipit had disappeared overnight but had been replaced by good numbers of migrants. Yellow-browed Warblers increased to a total of 10 birds spread across the island while Pied Flycatchers had increased to 12. Flocks of Pink-footed Geese totalled over 600 birds by the end of the day as they headed south through low cloud occasionally shrouded from view. Other migrants included a Redstart near the Lighthouse, 2 Whitethroats, 2 Snow Buntings, 1 Goldcrest, 2 Chiffchaffs, a Barred Warbler, a Reed Warbler at Bewan, a Tree Pipit and 2 Brambling. A Crane was heard flying around clearly disorientated by the mist, The Baird's Sandpiper and Little Stint also remained on Bewan. Away from the birds, if you believe we managed to see other things a pod of 4 Risso's Dolphins were seen heading South. It was one of those days of birding that will live long in the memory, superb day!

The birds didn't linger and the following day saw a clear out of most of the previous days migrants. The Redstart, 3 Blackcaps and 2 Yellow-browed Warblers remained while new birds included 4 Goldcrests, 2 Robins and a Garden Warbler trapped at Holland. The Pied Flycatchers had all disappeared overnight but the Baird's and Little Stint remained faithful to their usual haunt. Pink-footed Geese moved but in much smaller numbers with just over 200 seen heading South. As I said a much quieter day all said and done but by no means a bad day at all! 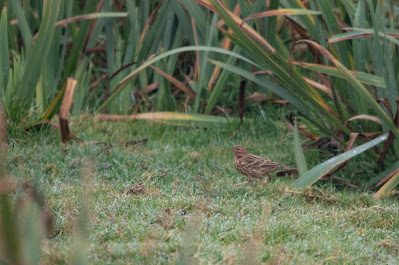 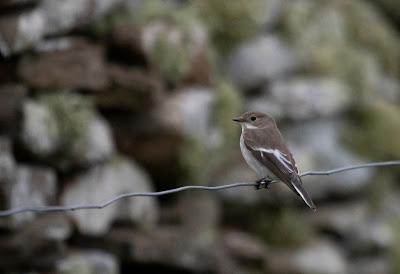 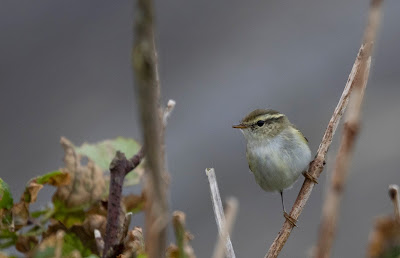 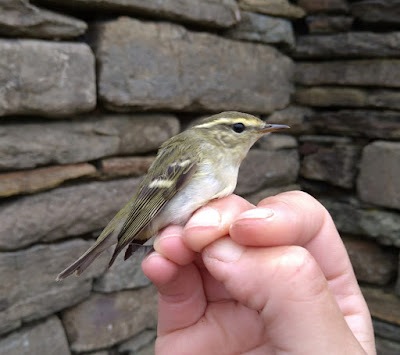