Not quite the rare fest we'd hoped for but still large numbers of Fieldfare and Redwing kept us sifting through Thrush flocks in the hope of finding another Sibe mega. However it wasn't to be this time around and we had to settle for uncommon migrants with not a lot in between!

The 22nd and 25th both laid claim to Bluethroats, the best of which was a male in the observatory crop on the 25th. A juvenile bird at Westness on the 22nd though it proved illusive enough to evade all but the finder! A mixed bag of weather also meant on some days coverage was rather limited. The Buzzard has remained on the island for the period and it's beginning to look as though it spend the winter on the island. Wildfowl numbers have also been creeping up a total of 180 Wigeon, 12 Shoveler, 9 Gadwall, 4 Mallard, 79 Teal, a drake Pintail and female Goldeneye were on Bewan on the 25th. Five Ring Ouzels were present among some 2000 Fieldfare and 1400 Redwing on the 22nd but we struggled to find anything else among the carpet of winter Thrushes that was spread across the island. The Common Rosefinch also remained until the 24th spending most of its time in the Funny Park and Front Park with a flock of up to 21 Brambling. A late Redstart was present late on the 23rd down by the pier as were Lesser Whitethroats at Bewan and the New Manse. Lastly a Little Bunting was at Iris Taing on the 25th. We feel the Autumn is now beginning to end and it won't be long until we're sifting through large Gull flocks again; but until then we'll be trying to seek out that final late mega! 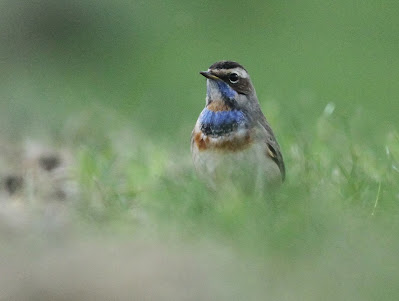