It's been equally mad over the past few days but a gradual clear out of migrants has allowed us to go back to some form of birding normality despite lingering mega's and couple more great additions to the North Ron year list!

The 7th was probably the busiest day of the lot and with birds still lingering after the incredible fall the day before it's barely a surprise. The adult male Red-throated Pipit was still lingering in East Loch Park while the Short-toed Lark was doing a similar thing just over the wall at Kirbest. The Bluethroat from a few days previous seemingly re-appeared at the Shooting Gallery coupled with the lingering Rosefinch while a further two Bluethroats were discovered at Haskie and Viggay in the afternoon. One of the lingering Little Buntings was seen near Senness and a very smart adult male Red-backed Shrike was seen between the Shooting Gallery and Burray throughout the day, unfortunately for at least one of the many lingering Goldcrests. The highlight for the day would have been the now long staying Eyebrowed Thrush until it's limelight was deservedly robbed by the islands second record of Pallas' Grasshopper Warbler, initially found in irises below Greenwall the bird proved tricky to absolutely get everything on but a net was deployed and the bird was trapped and ringed making for a pretty good first day of the finder David Roche's trip!

A quieter day followed mostly punctuated with lingering birds again. The Red-backed Shrike was joined on the list by the re-appearance of the juvenile at Holland in the morning, a bird that managed to elude and evade us for a number of days! The Bluethroats at Haskie and the Shooting Gallery also remained as did the initial Rosefinch which would be joined by a second bird arriving at the Lighthouse in the early afternoon. A Reed Warbler was still skulking away in the Kirbest ditch while nearby the Short-toed Lark was still giving us the run around. The Pallas' Grasshopper Warbler and Eyebrowed Thrush still remained giving a good feel to the day overall.

The 9th would see the disappearance of the Eyebrowed Thrush. A full week after a rather panicked set of obs staff and guests arrived to try and re-find it, it had departed. The story was similar across the board and the PG tips (birders slang for Pallas' Grasshopper Warbler) had also left the island, along with a good number of the commoner migrants. Saying this the Shrike, Bluethroat and one of the Rosefinches still hung on. The new additions for the day came in the shape of a 6th Red-throated Pipit for the Autumn at Rue (yes we know...it's getting silly!), a 1st winter bird that spent much of the day bombing about the North end of the island. The other addition was 2 Slavonian Grebes in the bay at Linklet, they've been rather long awaited!

The final day in this post and another good bird to add on to the yearlist! But first there had been a major clear out overnight meaning the Short-toed Lark and Red-backed Shrike has also departed for pastures new and we needed to fill the gap that had been left by them with something. That something arrived at about mid-day on the Links in the form of an American Buff-bellied Pipit! Initially feeding on the edge of Sandsheen the bird was seen by three observers including the finder before preforming a highly unappreciated bunk! The afternoon was spent trying re-locate it but this proved a futile task despite extensive searches. Elsewhere the Bluethroat was still hanging around the cow fields at Haskie and 2 Little Buntings were seemingly fresh arrivals near Stennabrek. 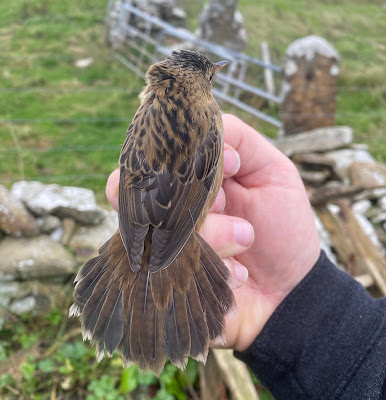 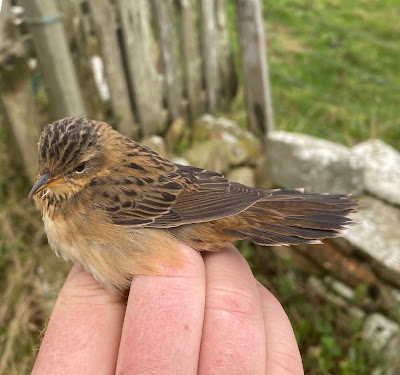 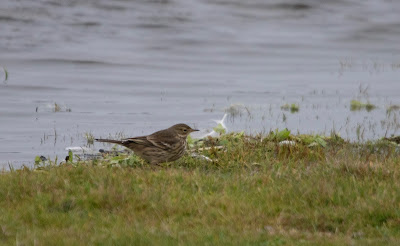 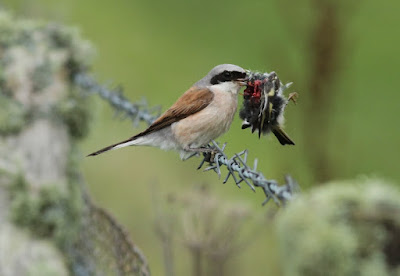