A bit longer than intended between posts but with obs work slowly mounting up and the arrival of staff just around the corner things have been a little bit more hectic than the winter lull we all get ourselves into! Stonechats have been the main order business with plenty seemingly moving through in the last ten days or so. They've been present on pretty much every day with birds at the Airfield, Ancum, Veracott, Peckhole, Rue and the Obs, which is a good sign considering the cold winter we've had. The first Sparrowhawk of the year, a female, was flushed from Holland Gardens on 28th and a male was seen being mobbed over Breck on 6th March. The 1st March bought in some nicer weather and with it the first cetaceans of the year in the shape of 2 Risso's Dolphin off the North end. The overwintering Green-winged Teal made it's first appearance in nearly a month on 3rd and was seen the subsequent day also displaying at a female Teal. The 5th saw us add two birds to the year list, a Woodpigeon was flushed from the field behind Nouster house in the morning and the afternoon bought us our first Lesser Black-backed Gull of the year, an adult on the Links with a mixed group of waders. A Peregrine appeared over Gretchen on the morning of the 6th, the bird looked to be quite pale but with no other interesting features it'll have to go down as a worn juv. The final bird of the post is a 1st Winter Iceland Gull that appeared on Bewan, also on the 6th before vanishing off towards the sea-watch hide. The 7th was a quiet affair and mostly dominated by trap repairs, a quick birding session round the island produced a solitary Stonechat on the obs track. 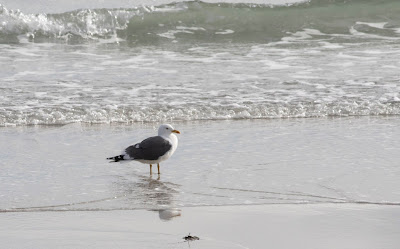 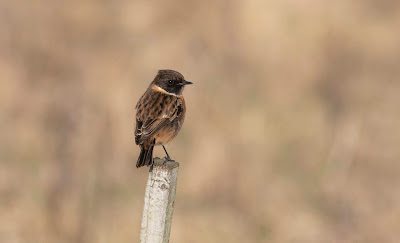 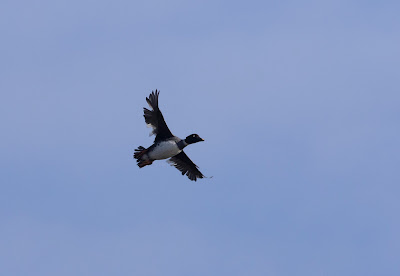