A longer interval between blog post than intended this time so sorry to keep you all waiting! The weather has been somewhat of a mixed bag over the past few days but this can always turn up unexpected birds and in this case it did! The big news however was the departure of Maddy, having been on island since mid-March she now departs for Durham University, we thank her for all of her efforts in the obs and out in field.

The 15th was rather quiet and lingering birds made up the vast majority of the highlights, 2 Rosefinches were still feeding around Holland but were joined by a Redstart that showed fleetingly on and off throughout the day, while a second bird was at Nether Linnay in the morning and a characteristically skulky Barred Warbler in Holland . The Dotterel was still on the Links but that otherwise summed up a very quiet day for new arrivals. A Pied Flycatcher has also been lingering in the Willows at Ancum.

The 16th was a very similar story with very little in the way of new birds, the highlights being 2 Lapland Buntings around Bewan and a lone Brambling in the Funny Park were all we had to shout about.

The 17th was a much different affair, the morning starting with a reconnaissance mission to investigate a dodgy Ringed Plover photographed the day before, but it turned out to be just that, however while sifting through Ringed Plover (a nightmare I thought was behind us following 2020's Semipalmated Plover) a wader started whizzing around the over the Ringo flock, after landing having been sworn at a few times because it was putting the Ringo's up, it transpired to be our second Buff-breasted Sandpiper of the Autumn and all bad feelings towards it were forgotten. With the day other seemingly fading away a trip back up North in the afternoon to have a look at the Buff-breasted Sandpiper would turn up an altogether rarer arrival in the shape of North Ronaldsay's first Lesser Scaup. A rather unseasonal juvenile on Bewan turned into a bit more of a cryptic bird than we thought, but good photos and careful research left us more than happy with the duck in question.

The 18th started with fog. Again. However as the morning wore on the fog burned off and were left with a rather pleasant day. The Lesser Scaup was still on Bewan in the morning, as was one of the Lapland Buntings, once the afternoon rolled around however the Scaup was nowhere to be found and maybe took advantage of the break in the weather and has left the island? The first Spotted Flycatcher of the Autumn was behind the Old Kirk and a new Rosefinch was present in a mixed finch flock at Neven. The news of the day was a large arrival of Chaffinch onto the island, just over 100 birds seemed to have appeared overnight and gave that day a really Autumnal feel and were joined by a few Bramblings.

Things still look interesting as the weekend goes on but with the 19th forecast as being quite a soggy we will have to wait and see! 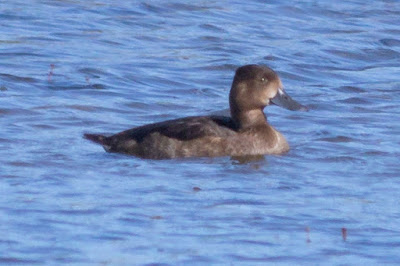