A very mixed bag of weather over the past few days has resulted in some superb birds, the 9th was the last of the more settled weather being replaced by a fairly thick fog and light NE breeze on the 10th the 11th would be best described as a washout, but produced birds nontheless.

The 9th saw the return of the 27's Pod of Orca around the island, unfortunately one less in their number than they should have had with the unfortunate demise of #151. On the avian front the still very obliuging Lesser Yellowlegs was still showing at Brides while the 2 Rosefinches remained in Holland and another 2 birds were at North Gravity and Nether Linnay respectively in the afternoon. Wood Warblers were present at the observatory and Ancum Willows. The bird of the day however wouldn't rear its head until the 10th, a Dove photographed near Greenwall in the early afternoon turned out to be the islands first Rufous Turtle Dove (ssp. Meena). The initial scramble to try and re-find the bird ended after a near three hour search with the bird being re-found between Howar and Greenwall where it spent the rest of the afternoon. It's taken and is taking a lot of work for us to be 100% certain of the birds identity, it's new ground for us here and for birding in the UK with it being the first early Autumn record for Britain, so while we remain confident we're still ploughing the books and online papers in the background. The 10th wasn't without other highlights, Barred Warblers were at the obs and Ancum Willow, while plenty of commoner migrants were around too, but understandably most of the afternoon was taken up by the Dove!

The 11th was sodden and practically unbirdable at times! Again it seemed the birds weren't all that bothered, a smart Pectoral Sandpiper was at Brides in the afternoon. No fewer than 8 Rosefinches were present, a flock of at least 6 birds in Holland and two at Westness including a very smart male. There were plenty of common migrants again but again the potential bird of day remains a bit of conundrum, a Flycatcher seen at Westness in the morning displaying features of Collared, but with poor photos and appalling weather it couldn't be quite be nailed down, hopefully it's one for tomorrow! 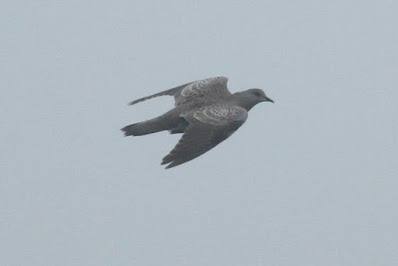 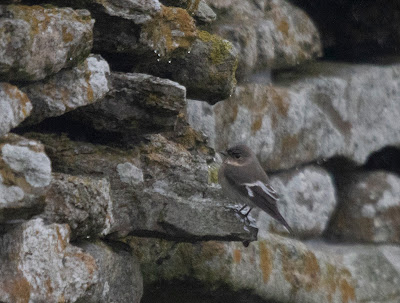