The 20th saw some definite leftovers from the previous days bout of Easterlies and a smattering of common migrants were added too by a few scarcer species. The day started with a Reed Warbler that was flushed from the long grass near Brides while the moth trap was collected. An unseasonal Pink-footed Goose spent the next day or two on Ancum before relocating to Hooking a couple of days later. Two House Martins were around Holland and the garden held other migrants to such as Lesser Whitethroat, Blackcap, Garden Warbler and duos of Chiffchaff and Willow Warbler. A total of seven Spotted Flycatchers were around the island with the majority (four) around Holland. The Hawfinch was still present in the area also. A Marsh Harrier tracked its way South through the island, a Cuckoo was by the Lighthouse and the first Garganey of 2022 was seen briefly at Hooking. An adult Mediterranean Gull was feeding with Black-headed Gulls near Brides Point and Mistle Thrush was in the fields near Stennabreck to round off a good day in the field.

The following three days were overall quieter but did produce birds nonetheless, a Yellow Wagtail did quick fly-by over North Manse but couldn't be pinned down while the Cuckoo remained up North and Grey Wagtail was around Howar. The 22nd saw poorer weather but did provide the bird of the week in the shape of a Subalpine Warbler at Scottsha', despite showing well a lack of call and it bouncing out the mistnet left us frustrated, although it was likely a Western based on plumage this is no longer deemed reliable for identification and will likely see it left as a Subalp sp. The 23rd provided our first Curlew Sandpipers of the year with two rather smart birds on Gretchen, they were joined by a 2CY Little Gull that dropped in briefly. The evening saw the Curlew Sands relocate to Ancum where they were joined by 2 Green Sandpipers. 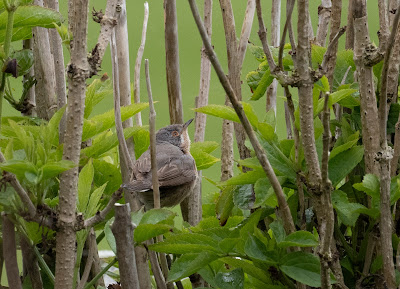