A calmer couple of days on 23rd and 24th were followed by a foul day of wind and rain on 25th. The wind switched round to the West and battered the island for the day, with squalls coming in off the sea all day, it didn't make for ideal birding conditions.

The 23rd was dominated in part by attempts to pin down the ever frustrating Dowitcher however this once again fruitless, it was seen again briefly on 24th but seems to have an ability to vanish on demand!

The 23rd otherwise was a quiet affair, perhaps to be expected with a few lingering birds still present. A Tree Pipit was at Westness, the Nightjar was still around Holland, a Little Stint was on Bewan and eleven Curlew Sandpiper were on the Links and our first Pink-footed Geese of the Autumn went South in a skein of 18 birds.

Much of the previous days birds were present on 24th although what is probably a new Great-spotted Woodpecker arrived at the North end, first seen at Senness it progressed slowly south as the day went on. A total of 24 Snow Buntings were around Bewan and noteably the Bluethroat appeared around Viggay once again.

The 25th was a write-off for the afternoon. A brief foray in the morning was largely unproductive, the Little Stint remained around Bewan, now somewhat more confiding. The links' Curlew Sandpiper count was not down to four birds and a morning sea-watch produced 111 Sooty Shearwaters and a lone Manxie. 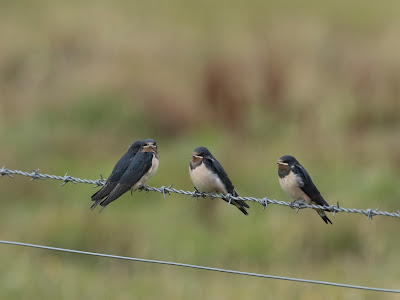 A few Swallows have been late in fledging youngsters this year! 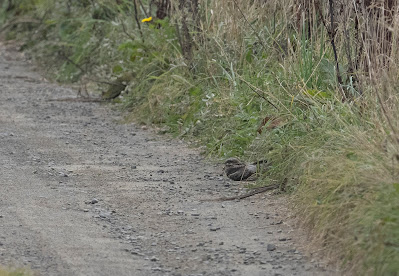