The warmer weather has continued and with the warmer weather has come more birds, something that all of us are very pleased about! The last two days have seen us add no fewer than 6 year ticks to island total. The 14th was the final day of punding and with that completed in the morning the afternoon was left to bird. The punding however saw us add our first of the 6 year ticks in the shape of two Swallows as they arrived in off the sea at Bridesness before continuing down the coast. The afternoons birding proved productive with a Grey Wagtail at Scottigar, the first White Wagtail of 2021 at the Beacon, 3 Black-tailed Godwits behind Vincoin and 4 Goldcrests. An arrival of Wheatears was also noticeable with 38 pitching in around the island, 9 of which were together between Scottigar and Rue. Other highlights for the 14th included a Stonechat around the obs, 2 Carrion Crow, 2 Pink-footed Geese, a smart Male Snow Bunting, 24 Redwing, 4 Song Thrush and another Swallow at Lenswick. The following day would see a flat calm start and also see another Tystie count, this time we managed to count 1057 birds yet again breaking the island record count, hopefully this indicates we'll have a busy breeding season on our hands. The count also produced a few other bits, most notable were a White-billed Diver off of Westness and the first Common Scoter of the year off the coast near T5. Otherwise a good count of 58 Great Northern Divers, a lone Puffin and several Wheatears made for a good pre-breakfast walk! The rest of the day was busy on the bird front and things kicked off with the first Blackcap of the year, a female at the Bothy, the first Arctic Skua of the year was on Tor Ness, the Green-winged Teal was back on Gretchen, a Sand Martin was seen at Westness in the late afternoon but the bird of the day went to a sub-adult White-tailed Eagle that was initially seen over Linklet Bay before heading North towards Fair Isle, only for it turn around and head South down the West side of the island and out towards Sanday. A busy day but one that seems so far removed from a week ago that you wouldn't believe it possible! The weather for the coming few days looks good and with staff chomping at the bit and enjoying the warmer weather its feels as though the good birds will keep on coming! 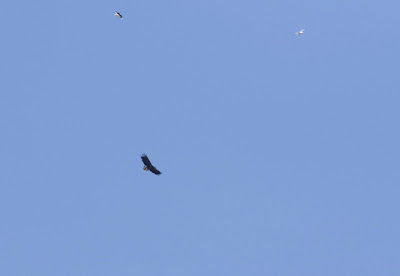 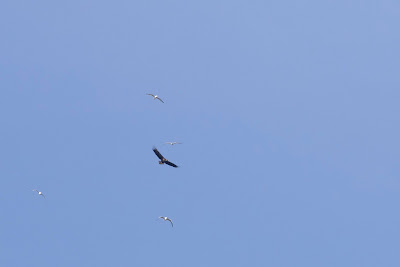 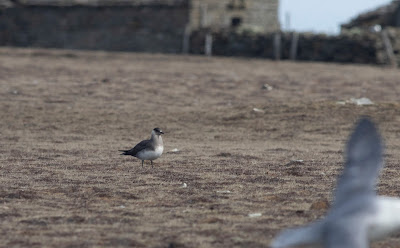 Arctic Skua being photobombed by a Fulmar