An unpleasant day on the 11th with a strong, cold force 7 easterly bringing with it frequent showers which was reflected in the quiet day of birding; the single Whooper Swan and Green-winged Teal remained along with counts of 20 Long-tailed Ducks and 13 Red-breasted Mergansers.   Other little random bits included a Merlin, a single Black-tailed Godwit at Westness, the Kumlien’s Gull yet again around Brides, the lingering Stock Dove still and the only sign of any new birds – two Mistle Thrushes at Gretchen.


A much nicer day on the 12th with lighter E/NE winds and dry and bright conditions; the sea was very quiet first thing with a single Blue Fulmar the only different bird while wildfowl of note comprised the Green-winged Teal, the Smew, 17 Pintail and 8 Goldeneye.   Two Hen Harriers floated around the island (and included one which heart-stoppingly bounced out of a mist net at Holland House!) while 96 Golden Plover and 31 Sanderlings were counted; a single Ruff and the Kumlien’s Gull were also noted. 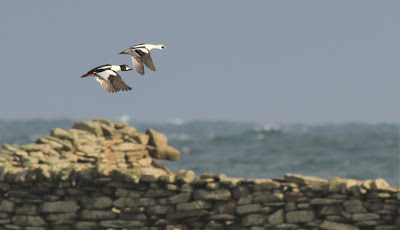 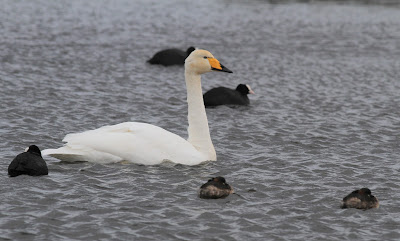