A decent day on the 4th with light easterly winds and the thaw gathering pace as the fields and lochs slowly returned to normal allowing waders and ducks back to their usual feeding sites; the only new bird through the day was a smart adult Iceland Gull at Bewan while the Glaucous Gull, Kumlien’s Gull and Lesser Black-backed Gull were all still in place.


Wildfowl included 472 Wigeon, 25 Goldeneye, 6 Red-breasted Merganser and the drake Smew while an impressive number of Passerines which came out of the woodwork after surviving the freeze comprised 88 Skylarks, 21 Rock Pipits, 10 Meadow Pipits, the Black Redstart, 6 Robins, 55 Fieldfares, a Song Thrush, 26 Redwings, 6 Reed Buntings and 54 Snow Buntings.


A generally unpleasant day on the 5th with long spells of rain and a much stronger easterly wind making things tricky in the field but helping complete the thawing process leaving only small areas of ice on most of the lochs.   There were some new birds on offer though as we braved the conditions with the first 2 Black-tailed Godwits of the year at Westness, the first Little Auk of the year past the seawatch hide and further increases in duck numbers including 20 Pintail, 3 Shoveler (the first ones after they all left as soon as the cold weather arrived!), 17 Goldeneye and the Green-winged Teal which appeared back on Gretchen like nothing ever happened!


The suite of scarce Gulls were all still present with the adult Iceland Gull up at the north end and the Glaucous Gull and Kumlien’s Gull feeding together at Brides where the Ruff also reappeared and the Hen Harrier floated around. 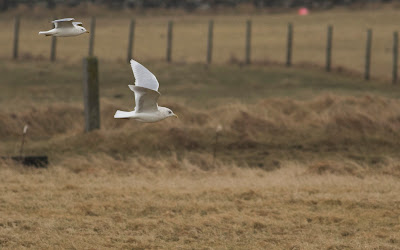 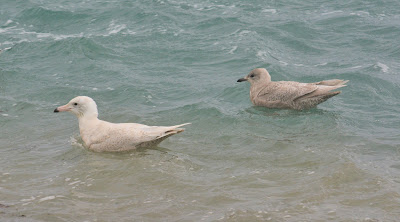