Dry and bright with a moderate SW wind on the 25th but there was little change across the island with seemingly only small numbers of common early migrants trickling through; landbirds included 2 Woodpigeons, 68 Skylarks, 17 Meadow Pipits, 28 Rock Pipits, 10 Pied Wagtails, 3 Dunnocks, 2 Robins, 52 Fieldfares, 2 Song Thrushes, 2 Mistle Thrushes, a Rook, 14 Linnets, 17 Twite, 11 Snow Buntings and 12 Reed Buntings (which have now left their wintering flocks and have started to spread out and start singing).


Other bits of note comprised the Green-winged Teal still, 9 Pintail, 7 Red-breasted Mergansers, the big female Peregrine, single Grey Plover and Ruff and 18 Black-tailed Godwits.   Also, worth mentioning is that the Kumlien’s Gull seems now to have departed as it hasn’t been seen since the 20th (cue it re-appearing again tomorrow!).


A mixed day on the 26th with lighter winds, slowly swinging round into the NE by the afternoon but regular spells of drizzly rain whispering across the island; again, there was little new in with a Sparrowhawk and little arrivals of 85 Fieldfare, 42 Redwings, 122 Skylark and 20 Twite.   Other landbirds included 19 Meadow Pipits, 8 Pied Wagtails, the Black Redstart still, 10 Linnets, 17 Snow Buntings and a Norwegian control Blackbird caught at Holland in the evening.


12 Great-northern Divers and 5 Red-throated Divers were counted on flatter seas while the Whooper Swan was still carrying out his lonely vigil and 2 Black-tailed Godwits were seen. 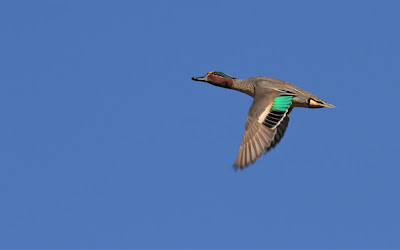 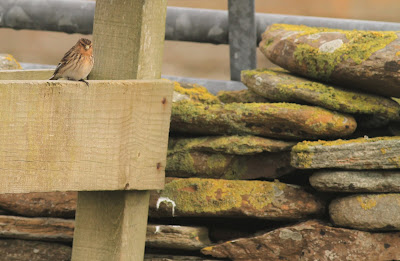