The freezing cold weather really took hold on the 28th, with the ground and most of the lochs frozen over, sheets of ice across the beaches, a bitterly cold force 6 easterly wind and frequent, heavy spells of snow sweeping across the island creating white-out, blizzard conditions for long periods; the main feature of the day was actually the absence of birds across the island with the majority of the Golden Plover, Lapwing and Dunlin along with many ducks disappearing off the island overnight as the freeing conditions took hold.


Limited coverage in the field did produce a Ruff feeding on the beach at Brides (the rarest bird of the year so far as it’s the first record between December and March for the island!), no doubt pushed around by the crazy weather, a Jack Snipe by the Obs, 2 Glaucous Gulls – the second winter again at Brides and a juvenile at Scottigar and the Barnacle Goose still with Greylags.


More of the same on the first day of spring with the remaining Golden Plover, Lapwing, Snipe, Curlew, Dunlin and Redshank along with the Wigeon, Teal and Mallard all relocating from the fields and lochs (which are still frozen solid) to the coast creating a pattern in miniature which I’m sure is being recreated across the rest of the UK at the moment.


With some good effort put in today and the remaining birds concentrated around the coast in sheltered bays and the few tiny patches of unfrozen water (where streams enters the lochs) we managed some accurate counts of wildfowl and waders which have chosen to wait out the cold weather; totals comprised 6 Herons, the Whooper Swan, the Barnacle Goose with 816 Greylags (pretty much concentrated in one field!), a Shelduck, 305 Wigeon, 12 Gadwall, 170 Teal, the Green-winged Teal (bobbing around forlornly on the sea opposite Gretchen as if waiting for it to thaw!), 39 Mallard, 4 Pintail, 16 Goldeneye, 278 Eiders, 9 Red-breasted Mergansers, 93 Oystercatchers, 74 Lapwings, 2 Knot, a Jack Snipe, 97 Snipe, 21 Bar-tailed Godwit, 70 Redshank, 264 Common Gulls and the Kumlien’s Gull which reappeared at Brides.


Landbirds were still present but struggling in the hard conditions with 92 Skylarks the only decent count as they concentrated around cattle feeders and sheltered beaches while the wintering Thrushes roamed around looking for food and other counts included 24 Rock Pipits, 14 Twite, 11 Snow Buntings and a ringtail Hen Harrier. 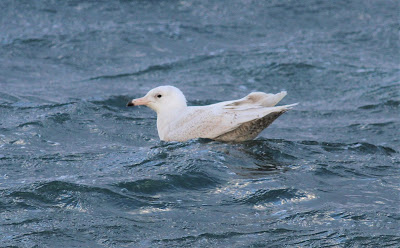 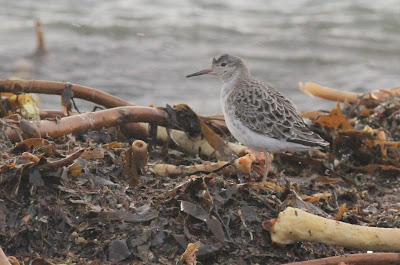 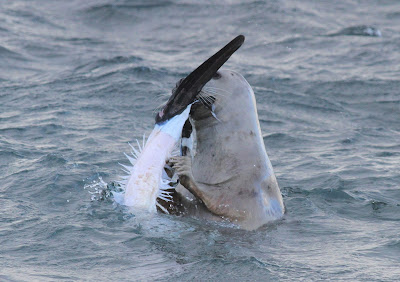 This Seal was loving the conditions though, having caught this huge Conger Eel!

Thank you braving the cold for your reports..I love reading them. Jack snipe spotted from the warmth of breckan kitchen window:)