The freezing conditions remained on the 2nd with the fields and lochs still frozen and the bitterly cold easterly wind still bringing frequent snow showers whispering across the island; all the action was predictably around the coast with a Black-throated Diver past the seawatch hide along with 9 Red-throated and 11 Great-northern Divers while also feeding offshore were an increased 21 Goldeneye, the drake Smew, the Kumlien’s Gull and Glaucous Gull with 410+ Common Gulls feeding in the surf at high tide and the unseasonal Ruff which reappeared at Brides.


Still very cold on the 3rd with lying snow and frozen / lochs but the easterly wind had dropped off a touch and there were some long spells of sunshine; the highlights largely remained the same with the Kumlien’s Gull and Glaucous Gull with 400 Common Gulls again but were joined by the first Lesser Black-backed Gull of the year at Scottigar.   A White-billed Diver (well, 95% sure it was!) was unfortunately picked up dead on the shore at Stennabreck while a Black-throated Diver was in Nouster Bay.


Some decent wildfowl counts were made through the day (again concentrated on the sea and around the tiny bits of open water remaining on the lochs) and comprised 753 Greylag Geese, the Whooper Swan, 3 Shelduck, 265 Wigeon, 5 Gadwall, 168 Teal, 66 Mallard, 5 Pintail, 20 Long-tailed Ducks, 13 Goldeneye and the Smew again.   Waders were also concentrated in certain spots and included 59 Ringed Plover, 241 Purple Sandpipers, 29 Dunlin, a Jack Snipe, 32 Bar-tailed Godwits and 286 Turnstone while a ringtail Hen Harrier roamed widely across the island. 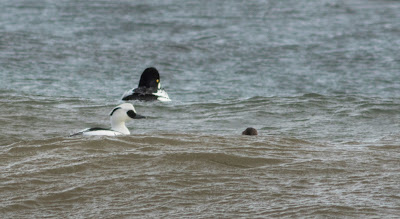 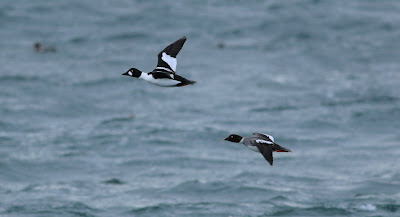 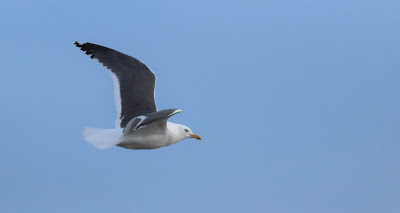