Brighter and drier on the 6th but we kept the strong, cold north-easterly wind, making things a bit of a slog in the field but there were a couple of new Gulls found today with a new second winter Iceland Gull joining the adult and a new juvenile Glaucous Gull joining the long-staying second winter with the Kumlien’s Gull still present.   The rest of the birds were as you were really, with the Green-winged Teal still on Gretchen and the Smew still on Bewan along with counts of 21 Pintail, 15 Goldeneye and 7 Red-breasted Mergansers.


Totals of 63 Lapwings and 27 Sanderling hinted that birds were steadily returning to the island after the big freeze while the Black Redstart was still at Howar and 7 Reed Buntings was a slightly increased total.


A horrible morning on the 7th with persistent rain and a strong easterly wind but this moved through by lunchtime leaving a very pleasant afternoon as sunshine and lighter winds dominated; Gulls were again to the forefront with the adult Iceland Gull seen again and the Kumlien’s Gull still present but presumably yesterday’s juvenile Glaucous Gull was picked up dead at Trolla.   Coming in the other direction there was also a little influx of 18 Black-headed Gulls and the Lesser Black-backed Gull was again present.


There was more evidence of birds returning to the island now that the fields and lochs have thawed out with counts of 64 Golden Plover, 50 Dunlin and 35 Bar-tailed Godwits with the Ruff also moving off the shore into the fields.   Two Merlins were also back on the island (the first ones since before the Beast from the East) while there were totals of 71 Snow Buntings, 60 Skylarks and 45 Fieldfares while wildfowl today comprised the Whooper Swan still, 20 Long-tailed Ducks, 11 Goldeneye, the drake Smew and 16 Red-breasted Mergansers. 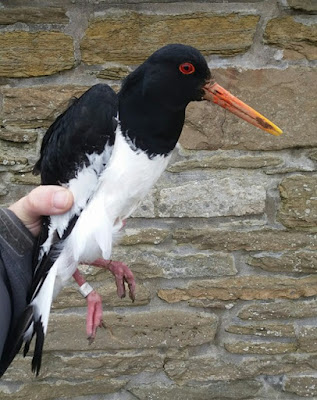 This Oystercatcher wandered into the Crow Trap and had originally been ringed as a chick in 2002! 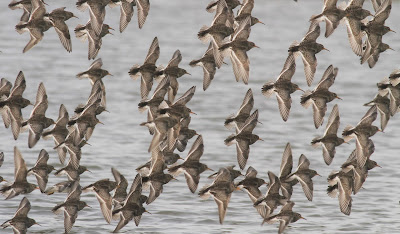