At the risk of repeating ourselves the highlights in this period were largely the same with the Northern Harrier floating round throughout, being seen at all corners of the island (getting itchy feet?!), the drake Smew still and the Black-throated Diver which reappeared in Nouster on 27th and 28th – having said that there were no sightings of the drake Green-winged Teal. 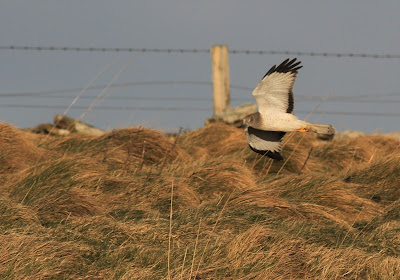 Other raptors were more obvious with at least 2 Peregrines seen, one of which, a young male showed many characteristics consistent with one of the Arctic races (probably calidus); 2 Hen Harriers, a ringtail and an immature male were also seen a few times and a Merlin was also zooming around.


There was more white-winged Gull action over the last few days with 2 Iceland Gulls seen throughout (a juvenile and a second year) being joined by a third bird on the 26th (although this was probably the bird first seen on the 21st).   Up to 3 juvenile Glaucous Gulls were seen on several days, largely staying on the west coast between The Obs and Westness.


Actual spring-like migration was predictably still quiet although Skylarks were seen heading north during the fine, sunny (but still extremely cold and windy!) weather of late, peaking at 111 on the island on 27th; also of note was the first Black-tailed Godwit of the year at Ancum; with the exception of wintering birds in the last few years, an unusual February arrival.


Some excellent observer coverage over the last few days produced some accurate whole-island counts with Greylag Geese peaking at 897 on the 27th with the flocks still containing 6 White-fronted Geese and a single Pink-footed Goose.   Other peak wildfowl counts in the period included 376 Wigeon, 148 Teal, 15 Pintail, 27 Shoveler, 9 Goldeneye and 18 Long-tailed Ducks. 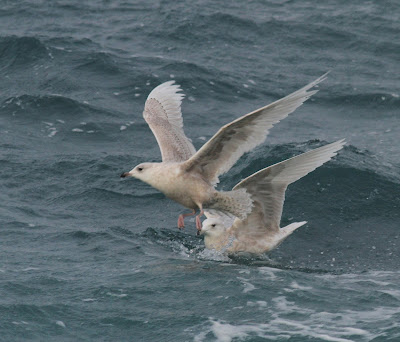 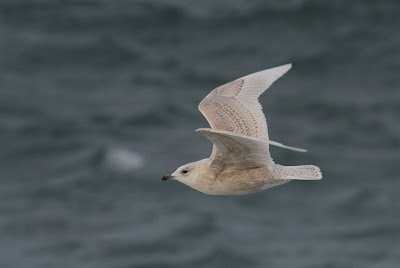