Despite rough, showery weather on the 5th it was clear that there was a little arrival of early spring migrants but the unexpected made the headlines first, with a very brief Red-necked Grebe in Nouster early morning which flew in, landed in the middle of the bay for a couple of minutes before heading off away again round Stromness Point; a real island mega with only c4 previous records!


The Black-throated Diver and 6 Red-throated Diver were also off the south end before census up the more sheltered west coast produced 12+ Blackbirds (including one which flew in low across the sea), a Song Thrush and a Robin.   The day’s other highlight came at lunchtime when a fine male Stonechat was trapped in one of the Heligoland traps – the first of the year.


Increased coverage and a fairly pleasant morning on the 6th revealed a wider spread of typical early migrants including 4 Woodcock, now 3 Stonechats (yesterday’s male being joined by two females), the first 2 Woodpigeons of the year, 4 Fieldfares, 45 Blackbirds, 5 Robins, a Song Thrush, 17 Rock Pipits, a Snow Bunting and a year’s high count (so far!) of 203 Skylarks with a very decent flock of 150+ at Nether Linney. 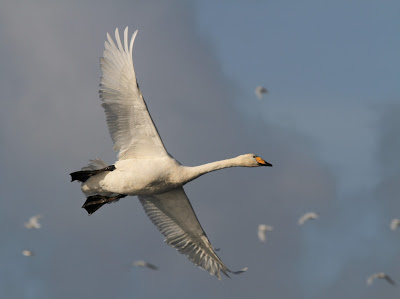 The Northern Harrier majestically reappeared after a week’s absence having a dogfight with a big female Peregrine (who later killed a Woodcock near the Obs) near Holland while other good birds included an adult Little Gull on Hooking Loch with a big influx of 164+ Black-headed Gulls (many of which back in full breeding plumage and investigating their traditional colonies) and a mobile juvenile Glaucous Gull cruised around. 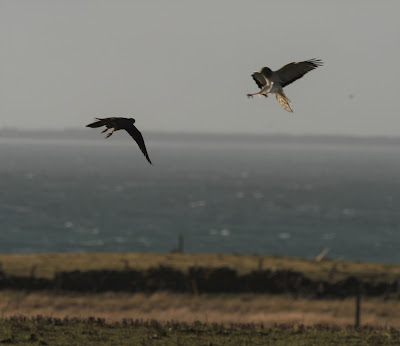 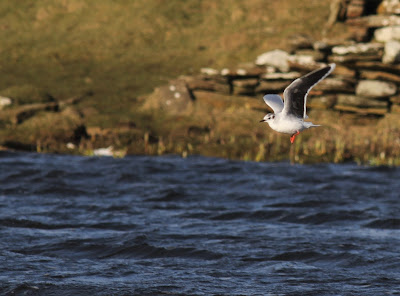