Breezy and overcast on the 25th with limited new arrivals although 65 Linnets and 20 Snow Buntings were new high counts for the spring while other landbirds included 5 Redwings and 2 Woodpigeons still at Holland.   Some decent wader totals for the day included 290 Golden Plover, 211 Oystercatchers, 49 Sanderling and 36 Bar-tailed Godwits along with a single Black-tailed Godwit.  Three Whooper Swans were new at the north end while a Merlin was busy chasing Skylarks at the south. 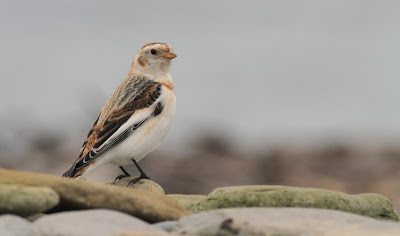 The weather changed for the 26th with early morning mist and murk lingering due to very light winds; the tentative opening of a handful of nets at Holland first thing almost immediately was rewarded with the capture of 2 awesome Long-eared Owls while a Woodcock was also flushed out of the garden.


There were more landbird arrivals through the day including the first Goldcrest and Sparrowhawk of the spring along with 2 new Stonechats, a Chaffinch, 34 Snow Buntings, 63 Meadow Pipits and 34 Pied Wagtails.


Calm seas also allowed counts of 21 Great-northern Divers and 8 Red-throated Divers while the 2 Pink-footed Geese were still with 515 Greylag Geese.   Two other birds to mention comprised the surprise reappearance of the Northern Harrier (well, a slight raising of the eyebrows perhaps!), he must disappear off island for spells but who knows where (?!) and an interesting duck on the sea off Brides which was presumably a drake Eurasian Wigeon x American Wigeon hybrid. 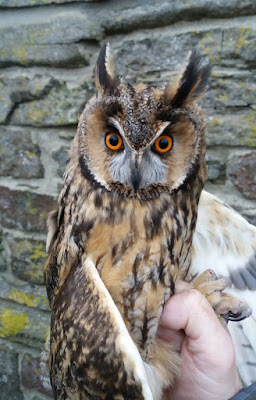 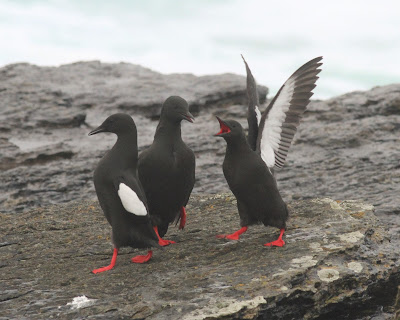 Tysties were back on shore in numbers on the 25th, photo Simon Davies 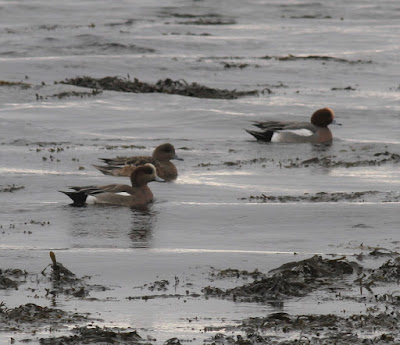