Other little bits and bobs included 3 Pink-footed Geese with the Greylags, an excellent total of 74 Long-tailed Ducks, 7 Red-breasted Mergansers, a Jack Snipe and a good selection of raptors with a ringtail Hen Harrier, the big young female Peregrine and a first winter male Merlin.


It was even windier on the 8th but sunny through the morning and with organised census now in full swing some good totals were achieved highlighted by the first Mistle Thrush of the year trapped at Holland and the first Dunnock of the year in the north; other migrant totals included 7 Stonechats (equalling the day record set in 2015!), a Short-eared Owl, 6, Woodcock, 3 Woodpigeons, an excellent 251 Skylarks, 10 Meadow Pipits, 24 Rock Pipits, 6 Pied Wagtails, 10 Robins, 65 Blackbirds, 5 Fieldfares, 2 Song Thrush, 5 Snow Buntings and 7 Reed Buntings.


The Northern Harrier was again seen at many points across the island along with 2 ringtail Hen Harriers and 2 Merlins while the 2 Glaucous Gulls were seen again with a good count of 418 Common Gulls. 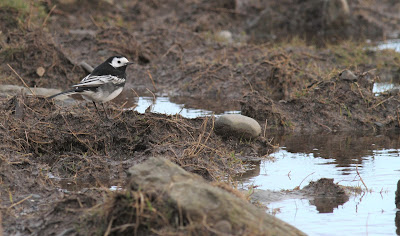 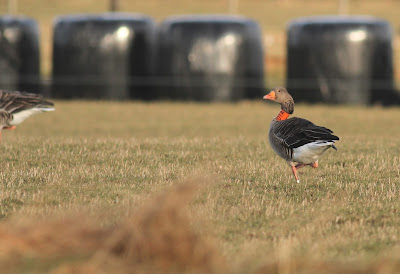 This neck collared Greylag Goose was ringed as a chick on Shetland in 2015 and was seen near Ancum, photo Simon Davies